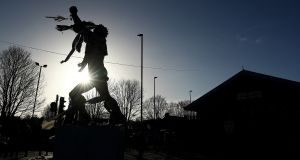 Fears that Leeds United’s promotion push might be derailed by the potential closure of Eleven Sports UK, the streaming service run by the club’s owner, Andrea Radrizzani, appear unfounded.

Senior figures at Elland Road are understood to be confident that, for the remainder of this season at least, any closure would make no real material difference to Marcelo Bielsa’s plans. The former Argentina and Chile coach has led Leeds to second place in the Championship, one point behind Norwich City, leaving them on course for the automatic promotion to the Premier League which would transform their finances.

The Elland Road club runs at an operating loss in the second tier, according to their most recent accounts. Although there is confidence in West Yorkshire that Eleven UK’s difficulties will not affect events on the pitch in the coming months, the owner has always made it clear he would not be prepared to remain at the helm of a Football League club for too long.

As recently as August, Radrizzani said: “If I don’t go up to the Premier League after a few years then I’ll sell because it means my cycle is done and someone else should do it. This is a loss-making league and it’s not fun to put money every year into a business that loses money.”

Radrizzani finalised a complete takeover of Leeds in May last year, replacing Massimo Cellino, and is a critic of the Football League’s new £595 million TV deal with Sky, believing it has undersold the Championship.

Although Eleven has contracts in countries across the world, the possible closure of its UK and Ireland network may give Radrizzani more of an incentive to win promotion – and, with it, access to the Premier League’s gargantuan broadcast deal – this season. There is speculation this may prompt the owner to offer Bielsa a little extra scope for investment during next month’s transfer window. – Guardian