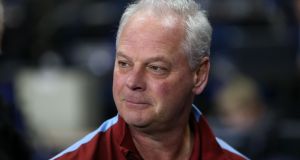 Kevin MacDonald has been assigned non-player-facing duties at Aston Villa after an independent investigation was launched into claims of bullying made by former Villa player Gareth Farrelly. Photograph: Catherine Ivill/AMA/Getty Images

Aston Villa have suspended their long-serving youth coach Kevin MacDonald from working with players, after a former graduate of the club, Gareth Farrelly, came forward to tell the Guardian about his claims of relentless bullying from MacDonald in the mid-1990s.

Former Republic of Ireland midfielder Farrelly accused the coach of “incredibly aggressive, constant verbal and physical bullying” and said it “took me to a place at 20 that nobody should have to go to. And I wouldn’t wish it on anybody.”

After receiving questions from the Guardian and notification of Farrelly’s recollections this week, the club informed the local authority designated officer, the Football Association and EFL, and started an independent investigation, led by a barrister, into the bullying allegations.

Farrelly, who moved from his home in Dublin aged 17 to sign a professional contract with the Midlands club in 1992 and played in midfield in the Premier League for Villa, Everton and Bolton Wanderers, said MacDonald, who worked as an assistant coach to Steve Staunton during his tenure as Ireland manager, belittled him and scoffed at his achievements, undermining his confidence and giving negative reports of his performances to the then Villa manager, Brian Little.

Now working as a solicitor having qualified this year, Farrelly remembers his time as a young player at Villa as a constant battle to deal with bullying. The effort to fight back and achieve his ambitions made him mentally and physically exhausted, he said in an interview with the Guardian, and left him in “extremely dark places”, feeling depressed and with suicidal thoughts.

He believes of MacDonald: “I say, and I maintain this position, that his regime destroyed far more kids than he ever developed . . . If people had been treated better, fairly, you can’t say they would definitely have made it but they would have had an opportunity to develop and kick on more.”

He was prompted to tell his story publicly after reading that only last year, around 20 years later, a Premier League investigation found MacDonald guilty of bullying a young Villa player in 2015 and 2016, yet MacDonald was allowed to continue at the club in a new role as the Under-23 coach. The player’s father had complained repeatedly to Villa that his son was beginning to show signs of depression because of bullying and emotional abuse by MacDonald.

“I could not believe the role he still occupies,” Farrelly said of discovering the findings of the Premier League investigation last year, which found the club did not carry out an adequate inquiry into the complaints. The league insisted on changes to practices at the Villa academy but MacDonald was left in place and moved to coach a higher age group. Villa were accused by the young player’s father and others of having a toxic culture in their academy but the club rejected that view and said MacDonald had a strong record of bringing players through to the first team.

Farrelly, who won six caps for the Republic of Ireland, said he can be considered a player who came through at Villa, but he rejects any presumption that it was because of MacDonald’s coaching. Looking back, he believes he did not fulfil the potential he had at 17, with many talented players in the same age groups as him at the club never making it as professionals.

“You have the period that I was there, in the mid-1990s, which was a bullying culture for the young players, then 20-25 years later, that has continued and this person is still there,” he said. “And then there is a finding of bullying but they left him in place – I struggle to process that.”

The Guardian contacted Villa to ask for its response to Farrelly’s recollections. In a statement the club responded: “The club referred these allegations immediately to its local authority and the football authorities, and with their agreement has commissioned an independent investigation into the former player’s complaints. That investigation will commence immediately and as a neutral act Kevin has been temporarily reassigned to non-player-facing duties pending completion of the investigation.”

The club said MacDonald had been instructed not to comment on the allegations of bullying, pending the outcome of the investigation. – Guardian