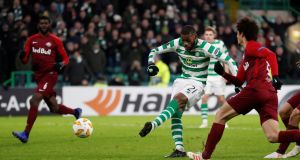 Celtic dramatically won through to the knockout stage of the Europa League despite a 2-1 defeat by Salzburg at Parkhead.

The Hoops needed only a point to make sure they joined the already-qualified Austrian outfit in the last 32 but were subdued in the first half as the classy visitors struck the woodwork amid several chances.

Israel striker Munas Dabbur, who scored twice in the 3-1 win over the Scottish champions in October, headed the visitors in front in the 66th minute before substitute Frederik Gulbrandsen capitalised on a horror mistake by goalkeeper Craig Gordon in the 78th minute to make it 2-0.

Salzburg defender Jerome Onguene fouled Celtic defender Filip Benkovic in the box in added time for substitute Olivier Ntcham to score from the penalty at the second attempt, but RB Leipzig’s unlikely 1-1 draw with bottom side Rosenborg meant Brendan Rodgers’ men held on to second spot in Group B.

Rangers crashed out after conceding a late goal to lose 1-0 against Rapid Vienna.

Steven Gerrard’s side, who had to win in Austria to progress to the knockout stages, dominated possession and hit the crossbar early on through defender Connor Goldson.

But the Glasgow side were unable to make a breakthrough in the Group G encounter and were punished by an 84th-minute strike from Dejan Ljubicic.

Alexandre Lacazette was a surprise inclusion but grabbed the only goal of the game after latching on to Mesut Özil’s pass – the German also a standout name in a largely experimental line-up which laboured to a 1-0 win.

Arsenal were already assured of top spot in Group E and a sparse crowd at the Emirates Stadium watched a lifeless encounter, with Emery’s side showing no less than nine changes from the team that beat Huddersfield 1-0 at the weekend.

Spanish side Villarreal took top spot in the group after goals from Samuel Chukwueze and Karl Toko Ekambi earned a 2-0 success over Spartak Moscow, with Rapid going through as runners-up.

In Hungary, Chelsea lost striker Alvaro Morata to injury and their 100 per cent record following a 2-2 draw with Vidi.

The Blues, who had already secured top spot in Group L, salvaged a point through Olivier Giroud’s free-kick after Willian put them ahead with another set-piece.

Ethan Ampadu’s own goal and a superb volley from Loic Nego turned the game in Vidi’s favour, with Spain international Morata suffering a knee problem and being replaced by Giroud at 1-1.

Belarusian champions Bate Borisov join Maurizio Sarri’s side in the last 32 after two goals from Nikolai Signevich – who was later sent off – helped them beat Greek club PAOK Salonika 3-1.

Russian side Krasnodar progress as runners-up after Standard Liege could only manage a goalless draw against Akhisar Belediyespor in Turkey.

Group H winners Eintracht Frankfurt made it six wins from as many games by coming from behind to beat Lazio 2-1 in Rome.

The Italians, already confirmed as runners-up, went ahead through Joaquin Correa, before quick-fire strikes from Mijat Gacinovic and Sebastien Haller earned the German club victory.

French giants Marseille finished bottom of that group with a solitary point after they had Boubacar Kamara and Lucas Ocampos sent off in a 3-1 home loss to Cypriot side Apollon Limassol.

In Group I, Malmo won 1-0 at 10-man Besiktas to take second spot and eliminate the Turkish club, with Belgian side Genk topping the group after thrashing Norwegian club Sarpsborg 4-0.

Also on Thursday, Rennes beat Astana to the runners-up slot in Group K with a 2-0 victory in France, with Dynamo Kiev finishing first despite a 1-0 home defeat to Czech side Jablonec.

The draw for the last 32 of the tournament takes place on Monday in Switzerland. Inter Milan, Napoli, Valencia and Benfica are among the teams set to join the competition having been eliminated from the Champions League.