Man City come from behind to beat Brighton and retain title 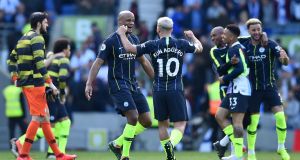 Manchester City celebrate after securing the title with a 4-1 win over Brighton. Photograph: Glyn Kirk/AFP/Getty

In the end, there was to be no denying Manchester City. No excruciating tension to endure as Brighton & Hove Albion heaved to repel the barrage whipped up by the visitors on the south coast, and no nail-biting finale as news filtered through of Liverpool goals on distant Merseyside.

What tension that existed here would be lanced a little after the hour-mark. Everything thereafter was a celebration of the champions’ enduring excellence.

They have been challenged this year, stretched wonderfully by Liverpool’s startling progress under Jürgen Klopp, but City, with 198 points gleaned across two seasons, have ultimately proved irresistible. Pep Guardiola had appeared agitated at times, the perfectionist in him piqued while his team’s lead was still slender. But, as Riyad Mahrez skipped back inside to leave Lewis Dunk crumpled on the turf before ripping a glorious right-footed finish into the top corner beyond Maty Ryan, the outpouring was actually one of joy rather than relief. For the first time in a decade, the Premier League had been retained.

Those on the visitors’ bench spilled out on to the turf, the goalscorer lost in the mess of bodies as substitutes and teammates celebrated. They knew there would be no coming back for either Albion or Liverpool from this. Ilkay Gündogan’s sumptuous free-kick would add further gloss to this latest victory, a 32nd from 38 fixtures this season, with City’s 95th league goal of the campaign. Again the finish could not have been more precise, arrowed unerringly into the top corner while Ryan grasped at thin air. Guardiola would even grant his inspirational captain, Vincent Kompany, the chance to leave the pitch five minutes from time to enjoy his own ovation, so comfortable were City in their advantage. This is the Belgian’s fourth title. He remains a Colossus.

In hindsight, that period of uncertainty early on, when City’s monopoly of the ball had lacked incision and the nerves had provoked over-elaboration, felt rather out of keeping with the afternoon’s work. If there had been anxiety in the champions’ approach, it had been exposed in those opening exchanges, with Guardiola sinking to his knees at the sight of his the ball being surrendered to Anthony Knockaert. The City manager was still head in hands in his technical area as Alireza Jahanbakhsh whipped his shot marginally wide.

The visitors might have been further flustered by confirmation, inescapable as it rippled round the arena, that Liverpool had opened the scoring up against Wolves. Brighton, liberated from the choking fear of relegation, were progressive and unsettled the visitors’ back-line. Yet none of that really excused the freedom offered to Glenn Murray, such a seasoned scorer in Albion’s ranks, at Pascal Gross’ corner midway through the first half. The striker rose unchallenged ahead of a flailing Ederson and planted his header inside the goalkeeper’s post.

For 83 seconds, the majority crammed into Anfield must have dared to dream. As it was, reality bit almost immediately with the concession having inadvertently served to free City up. Suddenly, there was urgency. Instantly, there was incision. The taunts were still in their infancy among the home support when Aymeric Laporte and David Silva combined to free Sergio Aguero, played onside by Bernardo, who slipped a crisp shot through the on-rushing Ryan and the champions’ momentum was restored.

Brighton were never likely to withstand the onslaught which ensued. Ryan may have done well to deny Bernardo Silva’s diving header, but there was pizzazz to City’s passing again, and a far more upbeat tempo to their movement. They smothered the life out of their hosts in what remained of the first half, inducing errors as they swarmed over panicked opponents.

Murray’s poor pass would present the ball to David Silva, with Ryan doing well to deny Mahrez, on only a fourth league start of the calendar year.

Unperturbed, the Algerian swung over the subsequent corner and Laporte, having evaded Murray, thumped his header down and in from the edge of the six-yard box.

There was something appropriate about the Frenchman making his mark on this occasion given his outstanding contribution to City’s campaign. Ederson, too, would contribute by tipping over Dunk’s free-kick just before the interval, but the visitors’ authority was rarely challenged thereafter.

Mahrez, on only a fourth league start of the year, would contribute the telling moment with that drag back and finish, before Gündogan’s coup de grace. City have set a standard Liverpool came so close to matching. But, in the end, Guardiola’s champions would not be caught. - Guardian