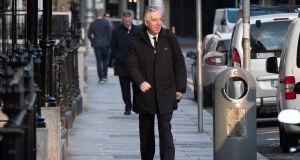 Fifa will send representatives to Dublin next Wednesday to get a firsthand account of the governance crisis at the FAI, the association has confirmed.

The organisation had two meetings with Uefa over the course of the past week with a delegation travelling to Nyon on Monday to brief Uefa president Aleksander Ceferin and its Director of National Associations Zoran Lakovic on the problems that have prompted John Delaney to step aside from his position pending the outcome of an investigation into aspects of the way he did his job while still chief executive.

The news comes just a day after Sport Ireland confirmed that it had recruited Northern Ireland accountancy firm KOSI to carry out an audit of the association. Mazars and Grant Thorntan have also been looking at various financial and governance issues at the troubled association.

FAI president Donal Conway, interim CEO Rea Walshe and director Eamon Naughton were in Nyon after which Uefa sent representatives to meet with members of the FAI Governance Review Group and Sport Ireland on Wednesday.

Fifa, an organisation that has had more than its share of governance issues in the past and which continues to have quite a few to this day, will now follow suit and send in officials to sit down with the FAI to get a sense of what had been happening at Abbotstown.

In a statement issued on Saturday evening, Conway welcomed to the proposed visit by Fifa, describing the game’s governing body as a “key stakeholder in Irish football” and suggesting that the federation’s input would be regarded as a positive contribution “as we transform our governance procedures and our Association.”

The FAI also indicates in the statement that it still sees the previously announced timetable for reform - a governance committee report by late June and proposals to the AGM in late July - as realistic when various former officers and outsiders have expressed the opinion that it is an entirely inadequate amount of time for the scale of change required.

1 In turmoil on and off the pitch: Where did it all go wrong for Barcelona?
2 Limerick’s Shane Dowling forced to retire at 27
3 The Best Of Times: Harrington stares down Garcia in epic Claret Jug battle at Carnoustie
4 Rugby impasse continues as no deal reached in fourth round of IRFU salary talks
5 Coronavirus has turned Viktor Hovland into long drive champion
Real news has value SUBSCRIBE
Crossword Get access to over 6,000 interactive crosswords