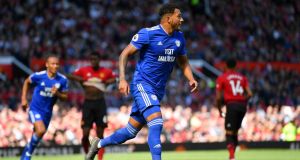 Manchester United require a serious reboot in the summer after their season ended in concerning fashion. This dire defeat to already-relegated Cardiff City followed last Sunday’s draw at the also already-down Huddersfield Town and means Ole Gunnar Solskjær’s side have flat-lined since he was made permanent manager.

That was in late March and since then only Watford and West Ham United have been beaten in a run of two wins and eight defeats in all competitions.

This afternoon they began brightly but were toothless before goal and allowed Neil Warnock’s men too easy an outing.

It means United finish sixth – the position they were when Solskjær took over before Christmas – and face entering the Europa League in late July if Watford win the FA Cup.

Solskjær gave Mason Greenwood a full debut and made five changes as Diogo Dalot, Andreas Pereira, Jesse Lingard, Chris Smalling also came in. Antonio Valencia, the captain, was on the bench, his final involvement ahead of leaving, while Ander Herrera, who will also depart, was not included at all.

Warnock made two changes: out went Víctor Camarasa, who was injured, and Danny Ward, who became a substitute, as in came Kenneth Zohore and Leandro Bacuna.

Cardiff’s opening goal came after Nathaniel Mendez-Laing pushed the ball past Dalot in the area. When the right-back tried to recover he stuck out a leg and down went the No 19. As Dalot protested, the referee, Jonathan Moss, gave the penalty, which appeared harsh. Up stepped Mendez-Laing who scored to the delight of the travelling fans’ delight who sang, “1-0 to the Championship”, and, to their former manager, “You’re getting sacked in the morning.”

For the second half Solskjær took off Phil Jones and brought on Anthony Martial. The re-jig here involved Scott McTominay going to centre-back and he was soon conceding a throw-in near goal under pressure from Zohore.

It was McTominay’s missed tackle that led to Cardiff’s second – this let Josh Murphy in down the right and with wide open space in front of David de Gea he picked out Mendez-Laing who had an age to finish.

United were veering into shambolic territory. Each time they roved forward a loose Martial or Lingard pass, or an awry Paul Pogba or Rashford shot, ended any hope of a comeback. There was a panicked edge, a lack of the quality required: composure. Cardiff were the side strutting through the afternoon and each time they attacked they looked in control and likely to score.

Solskjær’s final move was to take off Pereira and Dalot for Angel Gomes and Valencia, the latter receiving a warming reception.

But this proved as content as the home fans would feel. At the final whistle there were – hardly surprisingly – a smattering of boos. - Guardian

Seán Moran: Boylan documentary offers a compelling insight into former Meath boss 06:30
England face up to sterner test as Pakistan enter the bubble 06:00
Nhat Nguyen rallies round his family as dreams put on hold for now 06:00
RG Snyman primed for hectic run with Munster and South Africa 06:00
Sporting Cathedrals: History and tradition palpable at St Andrews, the Home of Golf 06:00