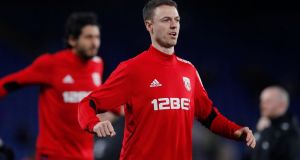 Jonny Evans: he is named as one of the players who allegedly stole a taxi following a night out in Barcelona. Photograph: Reuters

Alan Pardew said he felt “let down” after four of his West Bromwich Albion players allegedly stole a taxi following a night out on a trip this week to Barcelona.

Albion launched an investigation into the incident and then later named the four players in question on the club’s official website as they offered an apology for their actions.

The statement on behalf of Jonny Evans, Gareth Barry, Jake Livermore and Boaz Myhill read: “We would like to take this opportunity to apologise to our team-mates, the head coach, the club and especially the supporters for the events which have been the subject of widespread and negative publicity.

“We felt it important we identify ourselves as the players involved in an incident which occurred during the training camp in Spain this week out of respect for team-mates who otherwise could be implicated by association.

“We freely acknowledge and apologise for the break of curfew which we accept represented a breach of the standards of professionalism required of us as representatives of West Bromwich Albion. The club has informed us that it will now conduct its own inquiry into the incident and we will co-operate fully.

“ In the meantime we would like to assure our supporters that this incident does not reflect the determination and resolve we possess to do all we can to recover a difficult season.”

“This is obviously not ideal,” said Pardew whose side, currently bottom of the Premier League, are at home to Southampton in the fifth round of the FA Cup on Saturday. “They broke the curfew and that’s unacceptable, and I feel a bit let down by that.”

West Brom’s manager declined to comment on alleged details involving the taxi and the subsequently reported police involvement. “The club is clear it’s going to investigate properly to get to the bottom of it, and I think that’s right,” said Pardew. “It isn’t what we wanted.”

Coming at the end of a week that has seen Guochuan Lai, the club’s Chinese owner, sack the chairman John Williams and the chief executive, Martin Goodman, the unfortunate episode also raises questions about the strength of Pardew’s own job security.

His squad flew to Spain for the break on Tuesday. It is understood they had originally planned to spend a week in a five-star Barcelona hotel but after unexpectedly beating Liverpool in the fourth round they rescheduled, dictating that they flew home on Friday.

The four were interviewed but not arrested by Catalonia police on Thursday morning. Mossos d’Esquadra – the regional police force – said that following a night out, the squad members involved hired a taxi to transport them to a fast-food restaurant in the early hours. When they left the restaurant – believed to be McDonald’s – at approximately 5.30am, it is alleged they took the taxi and headed back to their hotel without the driver, arriving at around 6am. Police were alerted by the hotel and the taxi driver was reunited with his vehicle at approximately 8am.

Since Pardew succeeded Tony Pulis at the Hawthorns, West Brom have won only one of 13 league games and are seven points adrift of fourth bottom Huddersfield.

After being appointed by Williams and Goodman, the former West Ham, Newcastle and Crystal Palace manager has not attempted to hide his dismay – or fears for his own future – in the wake of their double dismissal.

“They’re good people and I’m disappointed, if I’m honest,” said Pardew. “They did good jobs. If your chairman and your CEO are moved on you can’t be sure of your job, but the club made the call.”

The 56-year-old conceded that “with hindsight” he “regretted” the Barcelona trip, and wished the team had remained in England. “We’ve got to put in a performance against Southampton,” he added before confirming that Daniel Sturridge will miss the next two games with a hamstring injury. The former England striker, on loan from Liverpool, limped off early in Monday’s defeat at Chelsea.