Eden Hazard hits two as Chelsea get back to winning ways 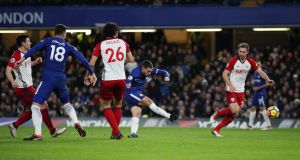 It was only when the third goal bulged West Brom’s net, as this contest drifted into its last quarter, that Chelsea could truly relax and bask in a restorative victory. Eden Hazard, forever their inspiration, had darted across the edge of the area away from Jonny Evans and ripped a shot inside Ben Foster’s near post, the goalkeeper wrong-footed and helpless.

After recent traumas, confidence is edging back. Antonio Conte would be blowing kisses to his wife in the east stand before the end, his mood improved and memories fading of those desperate recent performances, and hefty defeats, to Bournemouth and Watford. Life suddenly feels more bearable with his team back in fourth place, and only three points off second, with Barcelona due here next week.

Alan Pardew, as a manager who has triumphed here before, had sensed the anxiety gripping this corner of south-west London. His team selection had felt bold, a line-up designed to fray local nerves and outnumber their hosts in the centre.

Even the loss of Daniel Sturridge inside the opening four minutes, the striker limping from his second start of his loan spell after an innocuous fall, did not seem pivotal while Jay Rodriguez unsettled his markers and Salomón Rondón, another man-mountain striker whom Chelsea had coveted last month, bullied opponents. The Venezuelan headed Matt Phillips’s early centre wide, though it was an error by Victor Moses moments later which truly betrayed the home side’s jitters.

The right wing back was tracking back after his own team’s corner but, under pressure from Rondón, misplaced his header back to Thibaut Courtois and instead inexplicably looped it square to the unmarked Rodriguez. The striker could have advanced further into the area but, perhaps sensing Chelsea reinforcements swarming back in support, snatched at the shot which dribbled wide of the far post. It felt a wasteful miss at the time. In truth, it rather shrugged the champions out of their lethargy. By the interval they would enjoy a lead and, while their swagger was not restored, some of their poise was returning.

Hazard claimed the opener though it was Olivier Giroud, on his first start for his new club, whose influence was properly felt. The Frenchman ended the half sporting a bandage after Ahmed Hegazi inadvertently stepped on the back of the grounded forward’s head, and a bruised calf courtesy of Jonny Evans’s foul.

Yet Chelsea had benefited from his presence as a focal point to their front line. Giroud had attracted defenders as he stretched to reach César Azpilicueta’s cross – Foster blocked Davide Zappacosta’s attempt at the far post – and found space in a congested area only to scuff a sidefoot shot from Hazard’s precise delivery. That chance should have been converted.

Yet he sensed his moment was close. Midway through the first half, West Brom spurned a chance to belt a ball upfield and were duly pinned back, with Hazard emerging with the ball from the mess of bodies on the edge of the penalty area. The Belgian spun away from Gareth Barry, who simply could not keep up, and fizzed a pass in to Giroud, holding off Hegazi’s challenge. The lay-off was subtle but key, with Hazard dancing on to the loose ball to thump his 14th goal of the season crisply into the corner.

It was a superbly executed goal, exploiting selfless running from team-mates, and it offered Conte and his players a timely fillip. Álvaro Morata, having recovered from a back injury which, only last Friday, had threatened to rule him out for the season, was upstanding among the substitutes, lifted by the wave of relief. He made a first appearance since mid-January, by which time there was more conviction to Chelsea’s attacking play as Albion struggled to track the movement of Hazard and Pedro.

They earned some breathing space as Moses squared for Cesc Fàbregas and saw the Spaniard’s flick deflected by Craig Dawson back into his path in front of goal, with the wing back easing his finish beyond Foster. That felt harsh on the visitors who had only been denied an equaliser by Courtois’s sharp save to deny Rondón, the striker having harassed Andreas Christensen off the ball to rampage down on goal. Evans, rising at the resulting corner, guided a header wide of the top corner as Pardew wailed in dismay on the sidelines.

This was proving to be another one of those occasions for a team who, on paper, are well equipped to survive but have now won only once in 25 league games. Hazard’s third gave the scoreline the look of a thrashing, but West Brom are capable of better. Their position seven points adrift of safety is one of the mysteries of the season. – Guardian service