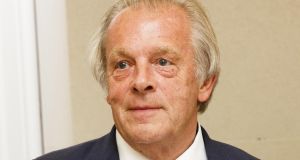 The annual unveiling of the salary paid to Gordon Taylor has become a ritual of public bewilderment, a surfacing of dysfunctional relationships embedded in a flourishing sport. This time the gasps were for the £2.29 million, or €2.59 million, paid last year to the 73-year-old, who is the chief executive – since 1981 – of the Professional Footballers’ Association, which is still constituted as an actual trade union.

Given the PFA’s distinguished past battling to overturn players’ oppressive pay and conditions, it is customarily noted that Taylor takes home very much more money than the chief executive of any other trade union. The Professional Cricketers’ Association paid its chief executive, David Leatherdale, £137,990 last year; the Rugby Players’ Association in England paid Damian Hopley £134,430.

The most serious unfavourable comparison, though, is with the money the PFA spends on what most people consider its principal purpose: to help the thousands of former professional footballers whose efforts built the clubs and game but who never earned anything approaching the millions banked by players today. Many find themselves after their short careers facing life’s cruel fates: physical injuries and infirmity, mental suffering, dementia, penury, addiction.

There has never been a clear explanation of Gordon Taylor’s astonishing pay, although it must be written into his contract

Last year the total paid in benevolent grants to members and former members was £530,000, although £400,000 is also paid to the Sporting Chance Clinic, which helped 25 people with addictions to gambling, alcohol and substance misuse. Last year £230,273 was spent on a network of counsellors, who worked with 362 players, a need greatly increased because of the number of people coping with having been sexually abused as players, some of whom are giving traumatic evidence in court cases.

There are many people grateful for the help but many, too, who accuse the PFA of not providing the best possible assistance to enough people, including some families of well-known former players with dementia. The PFA says it tries to help everybody it knows of in need, but, given it is in effect soccer’s welfare organisation for former professionals, it is not helped by the benevolent grants’ last year amounting to less than a quarter of Taylor’s salary package.

There has never been a clear explanation of Taylor’s astonishing pay, although it must be written into his contract. One well-placed source said his salary is pegged to the average a top-flight manager might earn – in which case he might be underpaid – but neither Taylor nor the PFA responded to a question about whether this is the case. Vague justifications over the years have been that many of his members are particularly well paid and, simply, that the PFA’s management committee of players approves it every year.

This contemplation of the PFA’s wider finances, its relationships with the clubs and leagues, is a journey into the dysfunctionality of England’s football family. The union’s return to the statutory certification office states that last year it had 4,930 members, who paid a total in fees and subscriptions of £547,435. That means the multimillionaire players’ membership fees were on average about £100.

The overwhelming bulk of the PFA’s income comes not from membership fees but from a percentage of the billions in television money made by the Premier League clubs. Last year was the first of the 2016-19 vastly increased £8.4 billion deals, and the PFA’s income from television fees went up from £19 million to £26.6 million.

This strange arrangement, in which the employers’ trade body funds the employees’ union, is in effect an industrial-relations peace deal. Taylor has always argued hard that his members provide soccer with its financial value, and he secured a percentage of TV income, to fund good causes, before the clubs’ income became galactic. The effort by Richard Scudamore, the Premier League’s executive chairman, to reduce this contribution in 2001, arguing the players had grown extremely wealthy and should fund their own union, was met with Taylor threatening a players’ strike.

Scudamore discovered two core elements of the modern PFA. First, it retained traditional trade-union loyalties of its members even though many are among the best-paid people in England; Taylor claimed 100 per cent backing. Second, Taylor is formidable in defending the union. Scudamore has battled the English Football Association into retreat over the years; the Football League is submissive and grateful for crumbs from the Premier League billions; he bestrides football for his 20 club owners and has the ear of governments. But Scudamore has never taken on Taylor and the PFA again.

These days, when the Premier League concludes its TV deals, Scudamore, who was paid £3.448 million last year, including £2.5 million in bonuses, negotiates with Taylor how much will be given to the PFA and most of what it will be spent on. So the PFA last year gave £3 million of it back to the Premier League clubs for youth development, a new arrangement. A further £3 million is paid to the English Football League for youth development, £3.5 million for the EFL’s community programmes and £1.2 million for the community programmes of the National League.

If this looks strange, that the players’ union should be funding apparently core activities of the employers, it is a feature of this settlement. A Premier League spokesman said it “requires” the PFA to spend the money on prescribed areas and signalled that the league has no influence on how the union spends its administration costs, including on Taylor’s salary.

“The Premier League makes a financial contribution to the PFA and requires that a significant majority of the funds provided are spent on charitable and good causes, and football development,” the spokesman said. “This includes benevolent grants for players who exit the game through injury, education grants for current and former players, and welfare schemes available to all professional players in English football. We work with the PFA to ensure these funds are spent appropriately. A proportion of what the Premier League provides is available to be used at the PFA’s discretion.”

Although the PFA defends the good work it does – although neither Taylor, who was away this week, nor anybody else from the PFA responded to our questions – many people believe the union is in need of modernisation and reform. They argue that with the millions it receives it could operate a streamlined, universal welfare programme.

The current system, of applications for grants considered by Taylor and fellow trustees, is considered old fashioned at best by many – a contrast with the long-serving chief executive’s salary, which is astoundingly modern. – Guardian