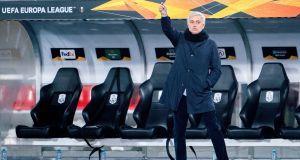 Jose Mourinho: has guided Tottenham Hotspur to the top of the Premier League. They host local rivals Arsenal on Sunday. Photograph: Georg Hochmuth/AFP/APA

José Mourinho has said that Tottenham’s position at the top of the Premier League means more than just local pride is at stake in Sunday’s north London derby.

Spurs lead champions Liverpool on goal difference with more than a quarter of the season completed, having spent more time at the summit over the past fortnight than during their previous 10 campaigns combined.

By contrast, Arsenal are already eight points behind their neighbours in 14th spot having struggled for consistency under Mikel Arteta and Mourinho acknowledged that Tottenham’s focus is on the bigger picture.

“It happened last season when we played Arsenal in the last part of the season. It was about winning against Arsenal to give something good, to have a good feeling. In this moment, we also look to the table and we are in a good position, fighting for positions in the top part of the table.”

Mourinho added: “But we never forget the fact that there are historical rivalries and what it means for the fans. Even for people that were not born at Tottenham, and many of us are in this situation. When you arrive at the club you understand the culture, you learn the culture and you share the values with the fans.”

Having made it through to the Europa League knockout stages with a game to spare despite a less than convincing performance in the draw with Lask Linzon Thursday, the Tottenham’s manager, who also said Tottenham could not afford to pay the salary Willian receives at Arsenal, expressed his dissatisfaction with the number of Premier League fixtures that have yet to be rescheduled.

Manchester United, Manchester City, Aston Villa and Burnley have played a game fewer than everyone else – and in Villa’s case that will soon be two because their match against Newcastle scheduled for Friday was postponed.

Mourinho said he had been trying to find out whether the matches will take place before the halfway point of the season, which he feels they should “because it can affect the competition” but had yet to receive a response.

The postponement of Newcastle against Aston Villa means Dean Smith’s side will have played two games less than the rest of the division after this weekend, with another four clubs only having played 10.

“I think it is also very difficult to accept that four clubs have one match less than the others and I don’t even know when they’re going to play these matches which in every [other] country would be impossible,” he said.

“They have to be played until at least the end of the first round [of games] so until matchday 19, they should be playing these matches. And I don’t even know when Burnley, Manchester City, Aston Villa, Manchester United and probably Newcastle and Aston Villa twice.

“But I was trying to know. I was trying for an answer this week and no one can give me that answer. By the way, we played four matches in one week and nobody was crying or supporting us about it. And now my colleagues, when do they play these matches?”