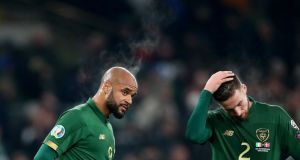 David McGoldrick says the decision to retire from international football was the toughest of his career.

The Sheffield United striker turned 33 last Sunday, just weeks after he announced that he would no longer play for Ireland, having decided to concentrate on his family and his club career.

“I was 16 when I made my (professional) debut (with Notts County), and I was 32 when I retired from international football, that’s 16 years – and I had to wait 15 years to play in the Premier League,” McGoldrick said.

“I’m in the Premier League now, and I want to make sure I’m at my best. I’ve had a lot of injuries in my career, and especially now with so many international games played in the space in between (league games), I wanted to make sure I was right, to extend my club career by being the best I can.

McGoldrick made the call after the penalty shootout defeat to Slovakia in October ended Ireland’s Euro 2020 dream.

The forward played through injury in Slovakia, and though Ireland boss Stephen Kenny claimed the player made his decision based on the knock-on effect of that injury, McGoldrick admitted he had been considering it for some time.

“I didn’t make my mind up just because of the injury, it’s been on my mind,” McGoldrick said. “I have picked up quite a few injuries, and I’ve gone and played, so I want to play for my country. If we’d qualified, I’d have stayed on.

“It was the hardest decision I’ve made in football.

“I had sleepless nights when I had to tell the manager, it was really tough. He’s a really, really good manager and a top man.

“It was a bit of an ordeal for me to come out and say ‘I’m officially retiring’, because I didn’t think I had that right. It was a tough decision.”

McGoldrick won 14 international caps since his debut against the United States in 2014 under Martin O’Neill, and scored just once, in last year’s Euro 2020 qualifier with Switzerland.

Kenny was disappointed to lose the experienced forward’s services, and despite the efforts of Sheffield United and Ireland teammates Enda Stevens and John Egan, the player is not for turning.

“They have been asking, yeah, most definitely,” McGoldrick laughed. “But I’m concentrating on my club career – I’ve made that decision, and I’m sticking with it.

“It wasn’t until I was 32 that I played Premier League football, even though I was signed by a Premier League club when I was 16. It took all these years to come.

“This is where every player wants to be, you’ll hear every player say it. I’m no different. I want to stay here as long as I can.”

McGoldrick watched on from a distance as Ireland struggled for goals since his retirement, with last month’s 0-0 draw against Bulgaria extending the team’s run of games without a goal to seven.

But the forward is optimistic that things can change, with the likes of Adam Idah, Troy Parrott and Aaron Connolly part of a talented group of forwards. He also had praise for the coaching talent of Kenny and his assistants, Damien Duff and Keith Andrews.

“Adam’s a really physical lad, he’s young, he’s strong, he’s got a good touch, he’s an all-rounder as a striker, I’ve high hopes for him. Troy, as well, he’s younger but he has ability, he can finish, he works hard.

“I still believe the setup there is in a good state, they’ve just had crazy, crazy things going off. People can see what’s going on.

“Stephen’s a really good manager, and the coaching staff with Duffer and Keith Andrews, they’re - and I’m not just saying it - two of the best coaches I’ve worked under.

“Their ideas, their voices, all the boys love working for the manager and the staff. I think, like with us [Sheffield United], a good result is massive.”