Brexit: No clarity yet on Premier League clubs being able to sign Irish teenagers 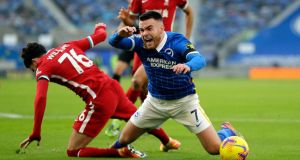 The continued ability of Premier League clubs to sign Irish players before their 18th birthday from January 1st next year has yet to be clarified. This despite the publication this week in England of extensive new rules with regard to the recruitment of footballers from abroad.

Fifa currently prohibit international transfers involving minors unless they are between clubs in EU countries but it is believed that extending the rule to post-Brexit Britain in respect of players from Ireland would be open to legal challenge.

The English football authorities published the new rules on Tuesday and while adult Irish players will be exempt from the heavily revised provisions which will be applied to those from other parts of Europe as a result of the UK’s departure from the EU, the document does not deal specifically with the issue of players aged 16 or 17 from Ireland moving to English clubs. Players like Caoimhin Kelleher, who made his Champions League debut for Liverpool on Tuesday night, more than five years after leaving Ringmahon Rangers for the Premier League club’s academy aged 16.

In the absence of academies with anything like the resources of those run by Premier League clubs, moving at this age continues to be regarded by many within the Irish game as an essential element of the development of many of Ireland’s leading senior international players.

The general effect of the new criteria published this week after a period of consultation between the British government and the various football authorities involved, will be to establish common requirements for overseas players to be granted a visa to play in England, regardless of whether they come from an EU country or much further afield.

The ongoing ability of Irish players to move to Britain, a benefit of the Common Travel Area, has been protected by the Immigration and Social Security Coordination (EU Withdrawal) Act 2020 which was ratified by the British government in November.

The restriction on the recruitment of minors between countries is a football one and requires an extension of the one granted by Fifa agreed with the EU almost 20 years ago.

Another potential complication for young Irish players requiring clarification is the new rule limiting the number of under-21 players from overseas that a Premier League club can make in any one window/year to a maximum of three/six.

If teenage players from this country were to be counted for the purposes of these quotas it would be bound to impact negatively on the numbers who would be signed in the future as their worth or potential would have to be evaluated in comparison to older players from other countries.

“These changes were expected,” says Stephen O’Flaherty, Managing Associate with law firm Lewis Silkin which advises a number of Premier League clubs on aspects of overseas recruitment. “With the end of free movement, players from Europe now need to qualify (for visas) under the same rules as those who are not from the European Economic Area (EEA). The new rules are broader in scope and allow a player to qualify automatically to play in England, based not just on their international appearances.

“I think the majority of players that you have seen come into the Premier League in recent years would still qualify but the system is more technical.

“It will be easier, though, to get certain players from outside of Europe in than it was before and so I think you might see clubs keen on value or promising talent looking more to non traditional leagues.

“Even European players who do qualify will require a visa and so that’s an added layer of paperwork. That wouldn’t be a key element but it does become another factor to consider. The bottom line is that it’s now as attractive to sign a player from Brazil as one from France.”

The position of 16 and 17 year-old Irish players has not, for the moment, been made clear he says. “Fifa has not amended Article 19.2 and so the situation is still not confirmed. However, if Fifa were to restrict the freedom of movement for Irish nationals, it’s likely to be subject to a strong challenge.”

With regard to the question of potential implications of the new Under-21 rule, O’Flaherty suggests that this too needs to be confirmed although, he says; “my understanding is that Irish players wouldn’t be caught in this as the regulation is contained in the GBE (Governing Body Endorsement) criteria and therefore related to who require a GBE and not those who can travel freely.”

Reacting to the publication of the regulations on Tuesday night, one official at a schoolboy club that has had many players signed by English outfits said that he had so many inquiries over the weekend that he believed clubs there may have been briefed to the effect that the situation would remain unchanged in relation to Irish teenagers.

“We had been concerned when the last window closed that that might be that,” says Will Clarke of St Joseph’s Boys in Dun Laoghaire, “but after a long period of holding off, we had six or seven English clubs on at the weekend looking to see about getting players in. I couldn’t believe it.”

There had, he says, been some suggestion of a meeting at Friday at which the position was favourably clarified although he admits that “there seems to be confusion on both sides”. One senior Premier League academy official told The Irish Times that they are awaiting clarification on how the new rules will be implemented and the impact they might have on the transfer of young Irish players.