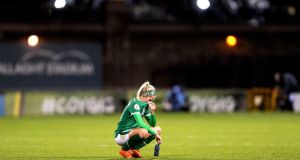 Germany’s whole trip might have been ruined by the goal Katie McCabe scored from the penalty spot here just before half-time, their entire qualification campaign perhaps, but neither that nor a second-half performance that was probably as good as anything Ireland have produced in their eight group games of this campaign was enough to salvage Irish hopes of a second place finish.

The goal was the first the Germans had conceded in their last 1,157 minutes of group stage games, a run that extends well back into qualifying for the last World Cup, but they made it 46 scored for this campaign alone with the three they got here and even allowing for the controversial nature of the first-half penalty that got them going Ireland had no complaints. Their hopes of making the play-offs simply needed not to have come down to this game.

Vera Pauw and her players had still said they would have a plan designed to win it beforehand and though they never really looked like doing that, the hosts played positively through the opening stages of the game and late on when they chased the goals they needed bravely.

Pauw made the obvious switch in goal with Grace Moloney coming in for a first competitive start and changed the shape of things at the back where Niamh Fahey returned in the centre of a three that was more often than not the central component of a five.

Up front, though, the coach took a chance on partnering Rianna Jarrett with Heather Payne, Ireland’s most creative player in the defeat by Ukraine. Playing the Brighton striker by herself would have been an impossible ask but Payne’s composure on the ball was immediately missed from midfield and it would be quite a while before she got to make any sort of mark on this game.

Ireland’s edginess at the other end was apparent from the outset with Aine O’Gorman happy enough, it seemed, to concede corners under any sort of pressure early on rather than chance anything more risky but Moloney coped well with whatever was thrown at her through the opening stages and her defence brought her into things repeatedly as they tried but failed to find a way of working through the German midfield.

Chelsea’s Melanie Leupolz anchored it well but it was the movement in front of her that really caught the eye with the visitors shifting effortlessly, it seemed, between 4-3-3, 4-1-4-1 and, at times, 4-1-5. Louise Quinn and co handled it all pretty well but it was clear just how hard they were having to work to do it.

They were undone, though, just about 20 minutes in when Katie McCabe’s guard dropped for a moment. Lina Magull was actually still looking for a free in a far more central area as striker Svenja Huth started to work her way into the area from the right. The Irish captain stuck out a leg as the German suddenly cut inside then seemed to decide that going down was the most inviting option. McCabe protested but Magull sent the spot kick just beyond Moloney’s reach to the bottom right corner.

When Tabea Wassmuth made it two just under a half hour in after a terrific run by Linda Dallmann, good link-up play by Huth and an initial shot that was well saved by Moloney before the ball came back out to the German, the particular mountain Ireland had to climb stopped seeming to be of the European variety.

The hosts, though, got one back with their first real chance of the half; a wonderful break started by Jarrett who outmuscled Dallman to win the ball before playing Payne into space. The 20-year-old skipped past Marin Hegering who picked herself up after one failed challenge so as to get quickly back into the box where she arrived just in time to foul Denise O’Sullivan as the midfielder got onto the end of a low cross. Having hit the crossbar from the spot in Kiev, McCabe put this one away with some conviction.

The Germans reacted by bringing on last season’s Champions League midfielder of the year, Dzsenifer Marozsan at the break but though they exerted a fair bit of pressure again for spells, they never quite regained the dominance they had enjoyed through the first-half. Given the way the other group game was going, it seemed for a while as though one goal more would be enough to get Ireland their play-off and they certainly chased it hard.

Pauw, criticised for the lateness of her changes in Kiev, was more proactive here and through the closing stages, they switched to a 4-4-2 with Quinn up front and Payne pushing forward from out wide on the right. Prior to that, though, Wassmuth had hit the crossbar and it was, in truth, no great surprise when the 24-year-old Hoffenheim forward capitalised on Ireland’s increased commitmens at the other end with a fine finish from the edge of the area.

Around the same time, word arrived that Ukraine had taken the lead over Montenegro and so three goals were going to be required for Ireland to salvage second place. That, to be fair, was utterly out of the question but there was no shame at all in the way the team went down here. What will hurt them far more are the points left needlessly behind in Athens and Kiev.