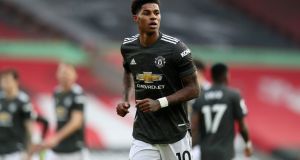 Manchester United’s Marcus Rashford is a doubt for the match against West Ham due to a shoulder injury. Photo: Naomu Baker/Getty Images

Goalkeeper Nick Pope is in contention to return after missing the thrashing at Manchester City because of concussion. Midfield trio Josh Brownhill, Robbie Brady and Dale Stephens could also be available.

Everton are without both first-choice full-backs — Lucas Digne (ankle) and Seamus Coleman (hamstring) — so boss Carlo Ancelotti is likely to persist with his 3-4-3 formation, with midfielders Tom Davies and Alex Iwobi filling the wing-back positions.

City have a fully-fit squad available with the exception of record goalscorer Sergio Aguero, who is back in training after a knee issue but will not be risked against the Cottagers.

Fulham manager Scott Parker has no new injury concerns and may make changes but the game will come too soon for defender Kenny Tete, who has returned to training this week.

West Ham will be without Michail Antonio — the striker has suffered another hamstring problem so record signing Sebastien Haller will get another chance up front. Winger Andriy Yarmolenko is back in training after self-isolating but full-back Ryan Fredericks has a groin issue.

Marcus Rashford is a doubt due to a shoulder complaint. The United forward is being assessed after aggravating the issue and coming off in the Champions League loss to Paris St Germain. The match comes too soon for Luke Shaw but Axel Tuanzebe is available after he was suspended in midweek.

Blues boss Frank Lampard has a fully-fit squad and is expected to rotate his resources again, following Wednesday’s 4-0 Champions League romp at Sevilla. Forward Olivier Giroud is pushing hard for his first league start of the season after scoring all four goals in Spain.

Leeds boss Marcelo Bielsa has no new injuries following the win at Everton and is expected to choose from an unchanged squad. Midfielders Pablo Hernandez (muscle strain) and Jamie Shackleton (thigh) continue to work their way back to full fitness and are unlikely to be in contention.

Albion defender Conor Townsend faces up to six weeks on the sidelines after limping out of the win over Sheffield United with a knee injury. Boss Slaven Bilic will make late decisions on deputy Kieran Gibbs and midfielder Jake Livermore, who have returned to training after testing positive for coronavirus.

Palace are boosted by the return of Wilfried Zaha, who missed the defeats to Burnley and Newcastle after recording a positive Covid-19 test. Boss Roy Hodgson will be without Martin Kelly (calf) while Wayne Hennessey (thigh), Nathan Ferguson (knee) and Connor Wickham (thigh) remain sidelined.

The Blades will check on Enda Stevens and Ethan Ampadu — Stevens has been nursing a knee injury in recent weeks and Ampadu missed the defeat at West Brom with a hip problem. Both defenders will be given until the last minute to prove their fitness.

Leicester’s Caglar Soyuncu, Ricardo Pereira and Wes Morgan will be assessed. Soyuncu has aggravated a groin injury, Pereira is unlikely to be risked after tweaking his groin, while Morgan has a back issue. Timothy Castagne (hamstring) is still out but Daniel Amartey and Wilfred Ndidi are available.

Harry Kane missed Spurs’ 3-3 draw with LASK in the Europa League with an unspecified injury but boss Jose Mourinho will check on the striker and expects him to feature this weekend. Erik Lamela (Achilles) is out and Toby Alderweireld, Sergio Reguilon and Carlos Vinicius are being assessed.

Arsenal wait on Thomas Partey(thigh) and David Luiz, who suffered a gash to the head during the defeat to Wolves. Nicolas Pepe is banned and Gabriel Martinelli (knee) is still out as boss Mikel Arteta prepares to recall all the big-hitters rested for the Europa League on Thursday night.

Liverpool goalkeeper Caoimhin Kelleher is in contention for his Premier League debut after making his European bow in midweek deputising for Alisson Becker (thigh). Defender Trent Alexander-Arnold (calf) and Naby Keita (hamstring) have returned to training and could rejoin the squad.

Wolves’ Raul Jimenez remains in hospital following surgery on a fractured skull after clashing heads with David Luiz in the win at Arsenal but is expected to be discharged early next week. Romain Saiss is training again after recovering from coronavirus but Jonny is out with a knee injury.

Tariq Lamptey is available for Brighton after a ban but midfielder Adam Lallana faces two weeks out after aggravating a groin injury and misses out against his former club. Striker Neal Maupay (hamstring) is a doubt and Davy Propper and Alexis Mac Allister (illness) continue to work their way back to fitness.

Southampton striker Danny Ings will be assessed ahead of the trip after training with the team for the first time since sustaining an injury against Aston Villa on November 1st.