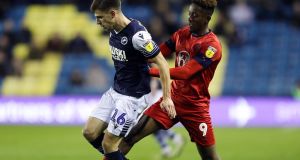 Jason Molumby in action for Millwall against Wigan at the Den. “It has probably been better than I could possibly have hoped for or expected here. I have been really happy.” Photograph: Bryn Lennon/Getty Images

Jayson Molumby is making a big name for himself at Millwall – and making a strong case for a full Ireland call-up.

The 20-year-old midfielder, on loan in the Championship from Premier League side Brighton, produced a man-of-the-match display on Sunday in the 1-0 win over high-flying Brentford.

Molumby, born in Cappoquin, is already captain of the Ireland Under-21 team currently topping their Uefa qualifying group. And an all-action style and commanding presence on the pitch suggests here is a player that may well go on to wear the armband for the senior international side.

Molumby has played a huge part in the Lions’ revival under Gary Rowett. A tiny budget in comparison to rivals has not stopped Millwall climbing to just two points off the play-offs.

And Brighton have also taken note. David Weir, the Seagulls’ loans manager and former Everton and Rangers defender, is in regular contact.

Teenager Aaron Connolly has already made his breakthrough at the Amex this season and gained full caps from Mick McCarthy.

Molumby said: “I want to try and play at as high a level as I can. It’s easy saying it, but another thing trying to do it. I also want to play for my country one day, that’s a main goal for me – to make the Ireland senior squad.

“I am in touch with Brighton a lot through David Weir. He looks after me, comes to a lot of games and feeds back how I am playing. Obviously Aaron Connolly has broken through into the first team this season, and for Ireland.

“He deserved his chance and has played really well. But I am here at Millwall right now, so what I need to do is concentrate on doing well as I am loving it here. I am buzzing just being involved, and it has probably been better than I could possibly have hoped for or expected here. I have been really happy.

“But of course as a player you want to aim as high as you can.”

Millwall have a strong connection with Irish players, going back to Tony Cascarino and current national team boss McCarthy, through to to Steven Reid and David Forde.

Molumby now has the experienced Shaun Williams as a midfield mentor, while Alex Pearce and Aiden O’Brien are also in the Millwall team.

Molumby added: “Shaun Williams is really good with me – brilliant in fact. He has always helped me and I have been enjoying playing with him and learning from him.

“In the formation we used against Brentford my role with Willo [Shaun Williams] is important, we both get a lot of the ball and the team has been getting points.

“The first few games in the Championship I was struggling a bit with the intensity, it was a lot to cope with. But I think my body has adapted and I am getting used to it.

“Doing the right things is important, recovering well and making sure you are right for the next game. It has been tough physically and mentally, but I feel really good now.”

The Millwall spirit is that of a natural underdog, punching above their weight financially and bloodying the noses of the big guns.

But, to keep pace with the promotion-chasers, Rowett’s men will have to avoid any repeat of the home defeat to struggling Barnsley before Christmas.

Another team fighting relegation to League One, Luton, are next up on New Year’s Day. Molumby added: “It is hard not to look at the table, but we can’t look too far ahead. Luton are next for us and that will be tough, they are scrapping.

“Getting wins against the teams lower down . . . I don’t know if it is even a mentality thing. They are fighting hard, maybe the teams higher up underestimate us a bit. We just have to always show what we showed in the win over Brentford.”