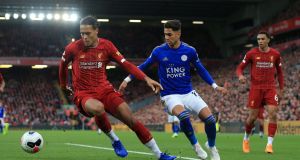 Liverpool travel to face Leicester on Stephen’s Day in a top of the table clash. Photo: Simon Stacpoole/Offside/Offside via Getty Images

What channel is the Premier League on on St Stephen’s Day?

This year was the first season where a non-traditional TV company came into the Premier League market. When Premier League rights went on sale for 2019/20 Amazon Prime purchased the package to show the midweek matches at the beginning of December as well as the matches on Stephen’s Day and December 27th.

However, Amazon Prime’s coverage is not available in the Republic of Ireland and instead those matches are broadcast on Premier Sports over here. On Stephen’s Day Premier will show nine live matches between Premier Sports 1 and 2 and their red button option. The single match on December 27th – between Wolves and Manchester City – will also be on Premier.

And what about New Year's Day?

On the first day of 2020 BT Sport will be broadcasting all nine games live with the 10th match also being shown on BT Sport on January 2nd.

What other games do Premier Sports show?

Premier also shows a 3pm Saturday kick-off from the Premier League each week. These are shown exclusively in Ireland and not in the UK due to the Premier League’s blackout laws. A full list of all of Premier Sports’ live matches can be found on their website.

How much is it to sign up to Premier Sports and BT Sport?

However, Eir and Virgin customers cannot get Sports Extra as there is currently no wholesale agreement in place between the providers.

So is there any way non-Sky customers can watch BT Sport or Premier Sport?

Yes, and there are cheaper options as well. This is where Now TV comes in. Now TV is essentially ready-to-go Sky available to anyone at any time. With no contract needed you simply set up an account with Now TV and then choose which pass you wish to buy. Passes range from 24 hours to two months and can be purchased for Sky Sports, Sports Extra or both.

Alternatively, Now TV are currently running a special offer of a two-month Sports Extra pass for €34, half the usual price of €68.

On Stephen’s Day you will get access to Tottenham v Brighton (12.30pm), Chelsea v Southampton (3pm), Manchester United v Newcastle United (5.30pm) and Leicester City v Liverpool (8pm). The five other fixtures on Stephen’s Day are all on the Premier Sports red button which unfortunately cannot be accessed via Now TV.

The following day there is just one match as Liverpool meet Sheffield United at 8pm (BT Sport 1).

In between Stephen’s Day and New Year’s you’d also get to see Manchester United visit Burnley on Saturday, December 28th which is on BT Sport.

All of the available sports passes can be found on nowtv.com/ie/sports-overview.

Can I get NowTV on my television?

As NowTV is a streaming service it’s available via an app on your phone or on a computer. However, if you have a chromecast you will be able to cast it from your phone onto the TV while the app is also available on LG Smart TVs, Apples TVs and some Samsung Smart TVs. The app can also be downloaded on an Xbox One or PS4 console as a means of getting it on your TV. Another option is to purchase a NowTV stick which goes into the HDMI port in your TV and will update with whatever passes you buy.

How many devices can I watch on?

NowTV can be registered on up to six devices and watched simultaneously on two. Be aware, however, that if using a chromecast it counts as two devices.

Finally, do I have to remember to cancel my pass or does it do so automatically?

Day passes and week passes will cancel automatically meaning you don’t have to do anything. However, monthly passes or anything longer auto renew at the end of term so if you don’t want to pay again you must remember to cancel.