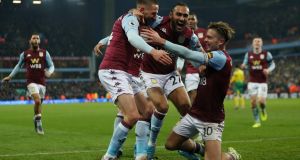 Conor Hourihane celebrates with his Aston Villa team mates after scoring the only goal of their match against Norwich City at Villa Park. Photograph: Paul Harding/Getty Images

Aston Villa earned a vital three points in their fight to stay in the Premier League as they edged a narrow win over relegation rivals Norwich.

Dean Smith’s side climbed to within one point of safety owing to a second-half winner from the substitute Conor Hourihane. Norwich, not for the first time this season, missed several chances and now sink to the bottom of the table.

The consequences of defeat were unpalatable for either side and it was a surprise to see both start nervelessly. A depleted Villa were not only missing John McGinn, who broke his ankle against Southampton, but also Conor Hourihane and Bjorn Engels who dropped to the bench. They started the better against an unchanged Norwich, though the momentum soon swung to the visitors and continued to tick back and forth for the rest of the half.

The first chance fell to Norwich and the fullback Sam Byram. It came from a 17th minute corner, Emi Buendía hitting the cross deep to the back post where Byram emerged through a crowd of players to make the header. The contact was good but the angle was just off and as it bounced off the ground and over Tom Heaton it came flush off the crossbar and rolled to safety.

Norwich looked composed and confident on the ball, Villa less so. But they were not stinting in effort and had half a chance whenever Jack Grealish was in possession. After the half hour the hosts should have scored when Matt Targett found Anwar El Ghazi on the penalty spot. The Dutch winger had almost been subbed off injured minutes earlier – his replacement stripped and readied – only to soldier on, but his shot was scuffed beyond Tim Krul’s left-hand post.

Norwich set about the second half with renewed vigour and had a double chance to score in the 50th minute. Two corners from Buendía caused chaos in the Villa box and first Alex Tettey with a left-foot shot and Tom Trybull at the back post with a header had their efforts cleared off the line. Byram had another headed opportunity too, but his smart gamble to meet Aarons’ cross at the end of a Norwich counterattack ended with a clipped effort that rolled just past the post.

Dean Smith responded to Norwich’s advances by bringing on Hourihane for the midfield screener Marvelous Nakamba and it proved to be a crucial intervention; eight minutes after his arrival he gave Villa the lead. It was a good move that began on the left wing with an exchange of passes between El Ghazi and Grealish. The Villa captain eventually received the ball in space, made his way into the box, and sent Tettey to the floor before picking out Hourihane who calmly swept the ball inside the far post.

With 15 minutes to go Daniel Farke made a triple substitution that involved bringing off Buendía, Norwich’s best performer. Rather than four men in the attack, Norwich now had six and chances sprang up; Byram had another headed opportunity from a corner while McLean hit a drive over from the edge of the box.

With three minutes remaining, the critical moment arrived as Norwich crafted a proper opening and Heaton made his best save of the match to deny Onel Hernández and secure Villa an important victory.