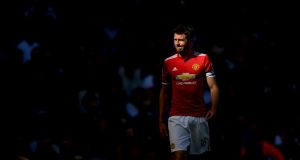 Michael Carrick of Manchester United in action during his final Premier League game for the club against Watford. Carrick has spoken in a new book about how down he felt following the 2009 Champions League final. Photo: Ross Kinnaird/Getty Images

Michael Carrick tells a story about the first time he encountered Alex Ferguson at Manchester United when, by his own admission, he might not have made quite the impression he intended.

Carrick was new to Old Trafford, taking it all in, trying to find the right words to show he belonged. “Similar to Chelsea?” he asked.

Twelve years on, Carrick still winces when he recounts that story, Ferguson’s expression hardening – “No, son, this is Manchester United, we’re different to the rest” – and the awful realisation he had said the wrong thing. But it is fair to say he gets it now.

His playing career at Old Trafford incorporated five Premier League titles, an FA Cup, the Champions League, the Europa League and three League Cups. Carrick is now working, in effect, as the club’s assistant manager and it is tempting to think some of the players see him as the good cop to José Mourinho’s bad cop. He was, after all, a popular member of United’s dressing room for a decade and his autobiography, Between the Lines, cements the impression that most people would already have of him: an intelligent, considered man who could make a successful manager one day.

A while ago, Carrick might have been described as too nice to go into management. These days, perhaps being a decent bloke is seen as a quality, not a hindrance. Jamie Redknapp, one of his former England teammates, said recently that the modern manager had to be “mates” with the players, and Carrick understands the point.

“The world’s changing,” he says. “It’s different now in all walks of life, not just football. But I still think it’s part of the skill of being a coach or manager – to know who responds to what. And some players do respond to a rollicking. If it needs to be done, you have to do it. As a player, that wasn’t necessarily me. As a coach or manager, if it was something that had to be done I’d be comfortable doing it but I’d still be true to myself. I wouldn’t turn into a madman or start throwing teacups and screaming.”

Carrick comes across as more the arm-round-the-shoulder type and, though he is almost 20 years older than some of the players who are coming through United’s ranks, he can testify from his experiences that players of a certain age are entitled to make the mistake.

As a young pro at West Ham, Carrick remembers spending £45,000 on a two-seater Dodge Viper – “a beast of a car” – and how proud he was to drive into Chadwell Heath, the club’s training ground. “I thought I looked the business. I’d got this new car with a big orange line down the bonnet. Then Tony Carr [West Ham’s director of youth development] pulled up next to me. He didn’t say anything, it was just the look of disappointment on his face. I’ve never felt so small and so embarrassed. All I could think was: ‘What the hell am I doing?’”

Carrick flogged the car at the first opportunity for £30,000. “You look at the lads now, with the lifestyles they have, the cars they drive and all the rest of it, and they’re going to make a few mistakes. Just because they are put on a pedestal from the age of 19 and 20 that doesn’t make them any more grown up or wiser. They’re still kids. For someone like me, with that Viper, to be too hard on these kids – nah, hang on a minute …”

He has written a book because he wanted “something personal for the end of my playing career, for me, the kids, the family, to look back on and be proud of. I never went into it for headlines or attention. It was just to tell my story and not the typical: ‘We played well on Saturday, we won 3-1.’ That was my main motivation. And there were things that people didn’t know about me.”

In the process, Carrick has spoken candidly about how the pressures of the sport, playing for a club with United’s unrelenting demands, took a heavy toll on him when he felt responsible for the team’s defeat to Barcelona in the 2009 Champions League final in Rome, allowed the vulnerability to infest his mind and plunged into a form of depression.

“I didn’t really let on to anyone. My wife, Lisa, knew. My mum and dad knew. My brother, Graham, knew, probably just from seeing me. But nobody else. This is the first anyone in the club will have known about it. That’s just me, I suppose, how I am as a person.

“I’m not really one who goes telling people things. I’m quite a reserved character and I keep a lot of things to myself. That’s my home life as well. I just try to deal with things and, rightly or wrongly, get on with it. Maybe if I had spoken to somebody about it properly, it might have gone away quicker or it might not have been as bad as it was. But I never did.”

Carrick’s account of the 2009 final shows how seriously he takes his industry. “Depression over a game of football sounds extreme, doesn’t it?” he writes. “But I genuinely felt in a very dark place. It might sound a crazy exaggeration comparing football to a death but after Rome I felt like I was grieving.”

He was left out at the start of the next season and Carrick’s mind went into overdrive, convinced he was going to be sold, that he would never be forgiven for the misdirected header that led to Barça’s first goal. Ferguson had hardly spoken to him, he notes. “I felt vulnerable.” Anxiety gripped him.

Could he not have approached his manager? “I didn’t feel I needed to. In some ways I felt I needed to get out of it myself. At that time I just felt I wasn’t playing well rather than anything else. I wasn’t suffering in day-to-day life. I wasn’t stuck in bed and people were having to drag me out. It wasn’t obvious like that. I don’t think anyone would ever have known when I got in the training ground, apart from: ‘He’s playing shit.’ I was miles away. All I was craving was: ‘I just want that feeling of playing well and winning a game,’ and having that good feeling again.

“He [Ferguson] won’t have known how it was affecting me and, honestly, I don’t know what he would make of it now. Probably the same as everyone else: ‘Well, that’s the reason then.’ It wasn’t that I was fearful of the manager but maybe I was showing a weakness in myself, subconsciously. He’s a father figure and there are plenty of examples when he has shown that side to his personality. I’ve seen [Cristiano] Ronaldo talking about when he lost his dad and how supportive the manager was. It wasn’t a conscious decision on my part that: ‘Oh God, I can’t talk to him.’ I just wanted to get through it, get back to playing well and everything would be fine. I never contemplated telling anyone at the club.”

Nor anyone at the Football Association when he went away with England. “South Africa was my worst,” Carrick says of the 2010 World Cup. “I didn’t want to be there. I said to Lisa on the phone: ‘I don’t want to be here, I want to come home.’ I would never have taken that step to come home but that’s how I felt. I never thought I should have been there in the first place.

“I wouldn’t have picked myself, because I wasn’t playing well. I couldn’t believe I was picked. It was a weird time to think: ‘I’m going to a World Cup with England but I don’t want to be here and I shouldn’t be here – why has he [Fabio Capello] picked me when I’m not good enough to be here?’”

In his new coaching role, Carrick would like to think he might be able to spot the symptoms if a United player was suffering the same. Then again he also says he would not have shown any obvious symptoms himself.

“Thankfully it’s talked about a lot more now, so hopefully if someone is going through the same they will come out and say it. The stigma isn’t there any more. People know they can talk about it, they won’t be judged and their career path won’t be changed just because they have been suffering.

“I’m not saying I could spot it but maybe if I see someone having a hard time I can tell that person I had a tough time, I could explain what I was feeling, what I was going through. It could maybe help someone.

“You look at players who are off form and there’s a general disappointment, their confidence goes low and their whole demeanour can change. I’ve seen it hundreds of times but it’s difficult to know what’s really going on inside someone’s mind.” – Guardian service