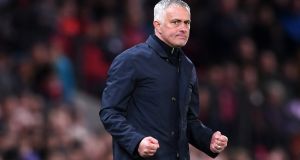 Off-field issues have been compounded by poor performances in recent weeks, but senior figures strongly denied a report in the build-up that the manager would lose his job this weekend regardless of the outcome here.

Newcastle, lifeless and winless heading to the north-west, looked set to ratchet up the pressure on Mourinho and sent United into a tailspin after deservedly racing into a two-goal lead through Kenedy and Yoshinori Muto.

But Old Trafford was rocking during a second half that will live long in the memory as Juan Mata and Anthony Martial struck before Sanchez snatched a last-gasp winner.

This could prove a huge moment in Mourinho’s United career, although there remains big questions to answer after a pathetic first-half display in which Kenedy netted early on.

Muto compounded matters as United conceded twice within the opening 10 minutes of a Premier League match at home for the first time and matters could well have got worse.

Mourinho, gesticulating furiously on the touchline, brought on Mata for Eric Bailly after 19 dreadful minutes and exasperated fans chanted ‘Jose’s right, the board is shite’.

That underlined the issues that need solving off the field, but on it United belatedly showed togetherness, skill and intent in the second half.

Mata pulled one back from a free-kick and Martial levelled with a smart low finish, before Sanchez headed home in front of the Stretford End in a memorable win.

This was a timely shot in the arm for Mourinho’s side ahead of the international break, ending their four-match winless streak in all competitions.

But this had long looked like being a nightmare night for United, whose only positive in the first half was turning up on time.

Newcastle’s performance belied their place in the standings and they struck the first blow in the seventh minute.

Nemanja Matic failed to cut out a pass and Ayoze Perez put in Kenedy behind the United backline, where he confidently cut away from Ashley Young and sent a low shot past David De Gea.

“You’re getting sacked in the morning” teased the raucous travelling fans, who were soon cheering an unlikely second.

Jonjo Shelvey’s cross into the box was not dealt with and Muto turned to rifle a low shot past De Gea, with Newcastle’s derided owner Mike Ashley celebrating in the directors’ box.

The remarkable start continued and De Gea had to be alert to stop a long-range Shelvey strike.

Mourinho had seen enough and brought Mata on for Bailly, meaning midfielder Scott McTominay was deployed as makeshift centre back.

Matic mustered the hosts’ first attempt of the evening in the 20th minute, with Marcus Rashford heading wide and Pogba trying his luck in a half in which they were comfortably second best.

De Gea saved his side from further embarrassment after McTominay lost Muto to get away a close-range header and Young was perhaps fortunate not have a penalty awarded against him for handball – something Muto also appeared to get away with.

Marouane Fellaini replaced McTominay for the second half and United started with renewed purpose.

Impressive Newcastle goalkeeper Martin Dubravka did well to stop Pogba before Matic fluffed his lines. Mata fizzed wide and Rashford headed over as the Old Trafford faithful kept up their support.

Mourinho darted well out of his technical after Kenedy flashed over at the other end, but United now had the bit between their teeth.

Mata gave the home fans hope when beating the wall and goalkeeper Dubravka to reduce the deficit in the 70th minute.

Matt Ritchie saw a flick denied at the near post but United were now in the ascendancy.

Fellaini, Chris Smalling and Pogba all had attempts before Martial, a pest throughout the second period, lifted the roof. Collecting the ball back from Pogba on the left-hand side of the box, the Frenchman struck home a low in front of the Stretford End.

The home side continued to press but, just as the winner looked set to evade them, Sanchez landed the killer blow.

Dropped to the bench after a poor start to the season, the diminutive substitute met Young’s cross with a header that had Old Trafford in raptures.