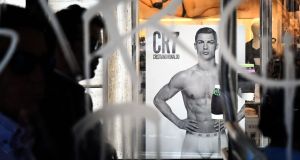 A passenger bus drives past an advertising poster for an underwear brand, showing a picture of Cristiano Ronaldo in downtown Rome. Ronaldo faces rape allegations after US police re-opened an investigation into claims by former American model Kathryn Mayorga that the five-time Ballon d’Or winner raped her in a Las Vegas hotel in June 2009. Photo: Alberto Pizzoli/Getty Images

When the #MeToo movement began, it brought down Hollywood’s most powerful man in Harvey Weinstein and enabled other women to come out and tell their tales, but only in Hollywood. From Uma Thurman to Jennifer Lawrence to Olivia Munn, almost every actress had a story. The ripple effect began, and soon women in other industries were empowered to stand up. Over the years, we have seen how #MeToo has shaken up Hollywood, the world of media, politics and now the beautiful game.

It was only a matter of time. High profiled men, designed to play the ultimate macho man in the ultimate macho game, given money at will and facilitated to do whatever they want. It is a story that is all too familiar. Yes, 99 per cent of sports stars can cope with it and never have an issue. But what about the one per cent? The Jameis Winstons, Patrick Kanes and Kobe Bryants who have all faced allegations of sexual assault. Cristiano Ronaldo, the world’s most famous and third richest athlete, now joins that list.

My question is this. As much as I love empowering victims to stand up and speak their truth and as much as I try to listen to both sides, I have to admit, where the #MeToo movement lets me down is how it’s carried the campaign forward. Victims are encouraged and are told they are being listened to, but besides Harvey Weinstein and the culture of shock that has followed with #MeToo, have we really done enough to protect victims, and as powerful as some of the stories have been, has #MeToo been limited in how it moves forward to prosecute those accused of sexual assault?

#MeToo has hit the world of football hard. Der Spiegel published what can only be described as a jaw to the floor investigative article. Ronaldo is accused of raping a woman nearly a decade ago and the apparent reason why Kathryn Mayorga is coming out publicly with her claims is that she feels inspired by #MeToo and sees the victims coming forward as heroes and inspirations.

The allegations against Ronaldo are obviously shocking and deeply upsetting. But this is not new in the world of football. In 2017, Brazilian footballer Robinho was sentenced to nine years in prison in Italy for sexually assaulting a woman in 2013 (he has yet to serve any time as his sentence was put on hold until the appeals process is completed); English player Adam Johnson was found guilty of sexual activity with a child and sentenced to six years in prison. We also had the Ched Evans case. Last October, women’s soccer player Alexandra Nord accused an unnamed English Premier League player of trying to rape her while she was unconscious in a hotel room. We also had the bizarre Karim Benzema and Matthew Valbuena controversy.

But, unlike Hollywood, many players find a way to bounce back. Benzema is back on the Ballon d’Or list, as is Ronaldo. Evans is back playing football, and I’m pretty sure Robinho is still professing his innocence to the world. So, really, is #MeToo, while empowering victims to stand up, powerless in dictating how these stories conclude? Is #MeToo as a movement powerful enough to set a new precedent? Yes, it took down Harvey Weinstein, but it failed with Brett Kavanaugh, Donald Trump and many sports stars.

The narrative is pretty clear, just like it was in Hollywood. The structures in football are designed to protect and shield the star player. It was this exact power pyramid that contributed to the cycle of abuse and misconduct that besieged Hollywood, media and now politics. But, people are still inclined to not believe the victim. Sure, many do, but also, many don’t. And either that reflects on us as a society and how these issues cause divisions, or else the limitations of #MeToo have been highlighted.

There is definitely nothing wrong in encouraging victims to stand up and talk, we all know that that’s a battle in itself. But the real struggle occurs after the victim stands up. Is #MeToo powerful enough to protect its survivors just like past Hollywood institutions and current football federations are powerful enough to defend their accused?

Will Kathryn Mayorga inspire other victims to come out the same way she was inspired? Time will tell, but just like other sexual assault accusations and cases, the real battle will occur from here on in. Sadly, the fanboys are already coming for Mayorga, the institutions are already protecting their star man, but who is defending the victim? Is this the start of football’s #MeToo or will this narrative continue like past ones?

1 Tour de France: Every yellow jersey winner must feel guilty by some association
2 Kevin Babington: Learning to live again after life changed forever on Long Island
3 Clifford brothers to the fore as East Kerry retain title
4 Matt Williams: The sky is not falling in on Irish rugby - but Ireland do need a new plan
5 Meet Liverpool’s throw-in coach who aims to ‘change football’
Real news has value SUBSCRIBE
Crossword Get access to over 6,000 interactive crosswords