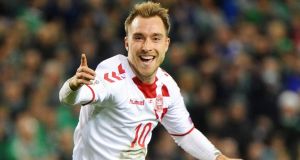 Denmark’s Christian Eriksen celebrates after scoring a goal during the World Cup playoff second leg against the Republic of Ireland in November 2017. Photograph: Aidan Crawley/EPA

Christian Eriksen is unlikely to play against the Republic of Ireland in next Saturday’s National League game in Dublin according to Denmark coach Age Hareide.

The Tottenham Hotspur playmaker picked up an abdominal injury in their 2-1 win away to Brighton in the Premier League on September 22nd and has not played since.

Spurs boss Mauricio Pochettino expected the player to make a swift return from the injury and play against Barcelona in last week’s Champions League game at Wembley but Eriksen’s continuing absence could see him miss the game in Dublin.

“Such an injury can be chronic, and it is true that Tottenham also fears that,” Hareide told Denmark’s Canal 9.

“It is doubtful whether we will lure him to Dublin and make him play. I do not think that Tottenham is particularly interested in that.”

Meanwhile, Sam Vokes insists Wales’ emerging talent means they are better placed than ever to cope without Gareth Bale.

Real Madrid star Bale is a fitness doubt for the glamour Cardiff friendly with Spain on Thursday and the Nations League tie against the Republic of Ireland five days later in Dublin.

Bale came off in the final 10 minutes of Real’s 1-0 La Liga loss at Alaves on Saturday with what is thought to be a recurrence of a groin injury.

The 29-year-old talisman has linked up with the Wales squad at their Vale of Glamorgan base, but he sat out training on Monday morning and will continue to be assessed by the Welsh medical staff.

“Gareth is massive for us, but we’ve got a lot of players playing at top level now,” said Vokes.

“They are playing regularly as well and that can only help us. If there are players missing there are others ready to step in.

“We’ve got talented players all over the field, we showed that against Ireland.”

But the game was also notable for Wales’ youngsters coming to the fore with Ethan Ampadu, Connor Roberts, Chris Mepham and David Brooks all impressing

But Vokes says the feel-good factor is back in Welsh football after the disappointment of missing out on the 2018 World Cup.

“These are exciting time for us,” Vokes said of the new Ryan Giggs era.

“It’s a strong squad now and the new generation of lads coming through is great to see.

“The Ireland game was one of the strongest performances we’ve put in for a long time.

“We’ve got two good games now and it’s exciting to be back at the Principality Stadium playing Spain.

“We’ve had a great atmosphere at the Cardiff City Stadium and now we can take that momentum to the Principality Stadium.”

Vokes still needs one more appearance to reach the 60-cap mark after missing out against the Ireland and Denmark last month.

The 28-year-old is hoping that goals in his last two Premier League games for Burnley will push his case for a recall.

“It’s important that I’m doing it at club level,” Vokes said. “It’s important to get the minutes at Burnley and put performances in. I need to be doing that to help myself at national level.”