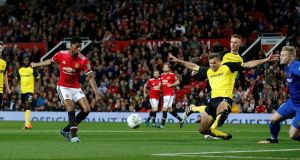 Marcus Rashford’s brace inspired holders Manchester United to as comprehensive a Carabao Cup victory as you would expect against much-changed Burton.

Seven months on from lifting the trophy at Wembley, Jose Mourinho’s men kicked off their defence by swatting aside the Championship side in the third round.

The United boss spoke in the build-up about taking Burton seriously, but the nine alterations made by Nigel Clough allowed the hosts to ease through as Jesse Lingard and Anthony Martial goals complemented Rashford’s double in a 4-1 win.

Mourinho also made nine changes on Wednesday but the strength in depth at his disposal saw them make light work of the Brewers, with Rashford opening the scoring inside five minutes.

The 19-year-old added another with a fine turn and strike, before a deflected Lingard goal added gloss to a scoreline that was extended by the impressive Martial early in the second half.

Rashford limped off after appearing to be hurt assisting the Frenchman on a night to forget for Burton aside from a token, if memorable, Lloyd Dyer strike in stoppage time.

Leroy Sane booked Manchester City’s place in the fourth round after they survived a scare at West Brom.

The winger’s brace kept Pep Guardiola’s side on track in the competition as they clinched a deserved 2-1 win.

Claudio Yacob’s second-half equaliser briefly threatened to take the tie into extra time and make a mockery of City’s dominance after they almost ran riot in the first half.

Sane, Gabriel Jesus, Raheem Sterling and Eliaquim Mangala almost put the game out of sight before the break but were let down by bad finishing or thwarted by the excellent Ben Foster.

Albion made it more of a contest in the second half and Hal Robson-Kanu hit the post in injury time.

But City’s night was tarnished after Ilkay Gundogan limped off on his first start since December following a serious knee injury.

He was forced off following a tackle from Yacob which left boss Guardiola upset on the touchline.