Cologne and their fans come but Arsenal conquer on bizarre night 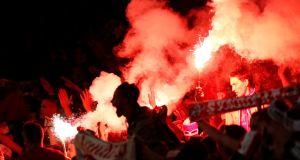 FC Cologne supporters let off flares at the Emirates Stadium during the Europa League game against Arsenal. Photograph: David Klein/Reuters

Europa League football arrived at the Emirates with a confusing, edgy, complicated energy. A one-hour delay due to the enormous band of Cologne supporters who travelled – many thousands in excess of the official allocation of 3,000 – and the intense atmosphere created inside the ground ensured that this Thursday night football lark felt mightily different even before a ball was kicked.

The visiting fans took over the Clock End, which made life intimidating for the home support who had seats in that area. Some felt unsafe and were advised by stewards to move. From the supposed sanctuary of the Family Enclosure to the high hospitality rung of Club Level, this corner of north London turned into Cologne on tour.

With crowd safety high on the agenda there was a danger the match itself would be an afterthought. But after all the pre-match concerns a football match finally broke out and Arsenal came from behind to start their European campaign with a win.

A tricky night took an early turn for the worse as Cologne seized an early lead. Not for the first time David Ospina erred and cost his team. The goalkeeper hoiked a half-clearance weakly, and when Cologne recovered possession quickly, Jhon Cordoba, who has a reputation as a “Colombian Didier Drogba” turned and in a moment of improvised ingenuity hooked a shot from distance that sailed over the stranded Ospina and in.

The massed ranks of Cologne supporters celebrated euphorically. It was only at this point that it became clear quite how many had gained easy access to the stadium. Red flares sparked behind the goal. Pockets of bouncing Germans in other areas of the ground provoked anger with home fans piqued that their sections had been infiltrated. The sensitivity of the situation was obvious. Unease was palpable.

Arsene Wenger was always going to pick a mixed team – certainly not his strongest but this was not a bunch of kids either. Alexis Sanchez started alongside Olivier Giroud and Theo Walcott so there was plenty of experience on the scoring front.

It wasn’t a particularly functional set-up, however. Midfield was deprived of balance and creativity, which encouraged Cologne to spring into counter attacks. The central heartland has been a problem area for a while with the supposed first choice of Granit Xhaka and Aaron Ramsey being stretched and overrun. The understudies, Mohammed Elneny and Alex Iwobi, followed suit and struggled to get a hold on the game.

This game marked the return of Jack Wilshere midway through the second half, some 13 months after his last appearance for Arsenal. It was notable in that cameo that he had more presence and natural instincts for the role than anyone else who has had a go this season. Whether his fitness can grant him more opportunities remains the critical question.

Wenger tweaked his team at half-time, reverted to a back four and brought on Sead Kolasinac. The adventurous Bosnian was instrumental in Arsenal’s recovery by grasping hold of a move that seemed to be going nowhere when Walcott took a heavy touch and then saw an attempted pass ricochet off a Cologne defender. Kolasinac walloped in a volley with ferocity and dip.

As this weird game wore on there were moments when Sanchez was on the ball and it was hard not to wonder what he was thinking to be part of all this: Europa League. Playing with team-mates who seem to occupy a footballing space several realms away (not necessarily in the best direction). A stadium where for various reasons the home support was thin on the ground. But there is something elemental inside him when it comes to football that means he can switch on to produce moments of pure inspiration. Having hunted down a long pass, he jinked back past a flurry of defenders and bent his shot beautifully past Timo Horn.

Hector Bellerin added a third, prodding in on the rebound after Walcott’s tame effort was saved. All in all, Arsenal’s preparation for a big challenge at Chelsea this weekend was certainly bizarre and at times worrying, but finished with a respectable ending.