Celtic ease past Dundee as warm up for Old Firm clash 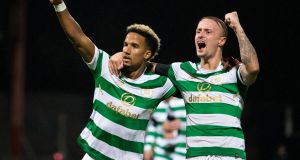 Celtic eased into the Betfred Cup semi-finals with a dominant 4-0 win over Dundee at Dens Park.

Scott Sinclair scored from the spot in the 25th minute before fellow attacker James Forrest added a second three minutes before the break.

Substitute Callum McGregor drove in a third with two minutes remaining before Forrest grabbed a second in added time with a drive to make it 56 domestic games unbeaten for the treble winners.

The Parkhead side join Hibernian, Rangers and the winners of Thursday night’s Motherwell versus Aberdeen tie in the last-four draw.

Brendan Rodgers’ side now turn their attention to the first Old Firm game of the season at Ibrox on Saturday before the trip to Anderlecht in the Champions League next Wednesday night.

With these fixtures in mind, Hoops fans were happy to see defender Dedryck Boyata start for the first time this season after recovering from a knee injury as Rodgers made six changes.

Mikael Lustig, Olivier Ntcham, Kieran Tierney, Patrick Roberts and Sinclair were also restored to the side while the Taysiders had Mark O’Hara and Randy Wolters back in the side.

Skipper Scott Brown came to Celtic’s rescue in the 18th minute when he raced back to foil A-Jay Leitch-Smith who had raced clear on to a Faissal El Bakhtaoui through ball.

Dundee, though, had no answer to Sinclair when he burst into the box with defender Jack Hendry sending him flying, the Parkhead forward picking himself up and confidently despatching the penalty past Scott Bain.

El Bakhtaoui failed to connect properly from a Wolters cross right in front of goal as Dundee responded and that glaring miss was to prove costly.

When Celtic defender Nir Bitton dispossessed Cammy Kerr it allowed the tireless Tierney to drive down the left before cutting the ball back for Forrest to sweep in from 12 yards.

By half-time few would have bet against the Parkhead side who looked the more likely to get the next goal when the second half began, with Leigh Griffiths’s deflected drive from 20 yards drawing a decent save from Bain.

The tempo dropped as the game unfolded further.

In the 76th minute Bain blocked a Forrest drive from 12 yards and the game was fizzling out until the Hoops broke with pace, Sinclair playing in McGregor who drilled the ball past Bain and there was more woe for the Dundee goalkeeper when he was beaten by a drive from Forrest.

Club rugby to start back from September 12th on regional basis 18:32
Katie Taylor out to banish all doubts in rematch with Delfine Persoon 17:56
Trick or treat: Ireland set for Halloween showdown with France in Paris 17:29
Tiger Woods to make PGA Tour return at Memorial Tournament 16:10
Alex Hales remains out in the cold as England name squad to face Ireland 15:23