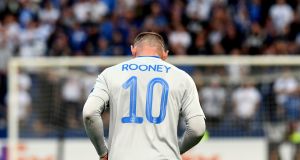 Wayne Rooney should receive the welcome he deserves as a “Manchester United legend” when making a first return with Everton on Sunday, according to José Mourinho.

Rooney is set to play against the side for which scored a record 253 goals and his former manager is in no doubt regarding how the Liverpudlian should be greeted.

“I think he’ll get the welcome he deserves,” Mourinho said. “Sometimes the word legend comes too easily [but] he’s a real legend of the club. The number of appearances, goals, trophies – clearly he’s one of the most important players in the history of Manchester United. I think the stadium will show him the respect he deserves. I hope before the match and after but not during it.”

Rooney spent 13 years at United before moving to Goodison Park in the summer. At the club he won five Premier League titles, the Champions League, the Europa League, the FA Cup and three League Cups, and was voted the 2010 PFA and Football Writers’ player of the year.

Last season the 31-year-old lost his place under Mourinho. Yet asked if Rooney, who is now first-choice under Ronald Koeman, has benefited from the transfer Mourinho would not be drawn.

Paul Pogba is expected to be out for around a month with a hamstring injury but Mourinho is confident others can step up.

“We have players waiting for an opportunity,” he said. “He started the season really well, we’ve had one match per week we’ve been going with the same players. But there are good players more than ready to play. Honestly we miss Pogba and we need him but we have good players. Ander Herrera, Marouane Fellani, Michael Carrick; they’re waiting for a chance and they are ready.

“We lost important players last season and we were not crying or making excuses. That’s football. Squads are there to try to cope with this kind of situations.”

“He’s not even training with the group in a normal session,” Mourinho said. “He’s just doing parts of it. I still think he has a couple of months.”