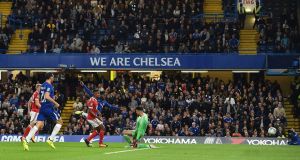 Michy Batshuayi scored a hat-trick as Chelsea provided a glimpse of the future with a 5-1 Carabao Cup rout of Nottingham Forest on Wednesday night.

Kenedy and the impressive Charly Musonda were also on target and Tendayi Darikwa scored a late consolation for Forest as the Premier League champions advanced to the fourth round with ease.

Ethan Ampadu, the son of former Republic of Ireland under-21 international Kwame, became the first Chelsea player born this millennium, a week after his 17th birthday, on a night when Eden Hazard delighted on his first start of the season after his broken ankle.

Hazard, Batshuayi and Musonda formed an all-Belgium attacking triumvirate which was too much for opponents who also had defensive lapses.

After some early defensive jitters of their own from Kenedy and Willy Caballero, the goalkeeper who was making his debut a week prior to his 36th birthday, Chelsea took the lead.

Kenedy’s Blues career looked like it could be coming to an end when he was sent home from the pre-season tour to Asia following some ill-advised social media posts on China. He apologised and has been reintegrated into the squad.

The Brazilian scored his first goal since March 2016 when he ghosted behind the Forest defence to meet Antonio Rudiger’s cross with a side-footed shot that beat goalkeeper Stephen Henderson.

Next came some good fortune as Hazard’s through ball took a deflection off Jack Hobbs and Batshuayi showed composure to finish.

Kieran Dowell curled a free-kick onto the crossbar for Forest, who, having come close to halving it, saw their deficit increase.

Cesc Fabregas found Musonda inside the right edge of the area and the Belgian fired the ball under Henderson for his first Chelsea goal.

Musonda prodded wide from another Fabregas pass before half-time and Hazard struck a post soon after the restart after making space for himself on the left edge of the area.

Hazard then raced on to a long Fabregas pass and deceived Henderson. He might have scored himself but instead passed for Batshuayi to roll the ball in.

Dowell shot narrowly over before Fabregas was replaced by Ampadu, who signed from Exeter in the summer with a fee still to be settled with the Devon club. Ampadu, who plays for Wales in international underage football, did not look out of place.

Chelsea scored a fifth when Kenedy’s shot from a tight angle bounced back off the bar and in off Batshuayi’s lap for his third.

There was still time for Forest to score, as Darikwa netted with the final kick of the game.

Dominic Calvert-Lewin netted a brace and Oumar Niasse also got on the scoresheet as Everton’s miserable run came to an end with a 3-0 third-round victory over Championship strugglers Sunderland at Goodison Park.

Calvert-Lewin produced the Toffees’ first goal since August 24th with a cool finish in the 38th minute before adding another composed strike six minutes after the break.

The England Under-21 forward was subsequently denied a superb hat-trick as his header came back off the post, before substitute Niasse marked his first Everton first-team appearance since May 2016 by registering his maiden goal for the club with seven minutes to go.

Everton went into the tie in major need of a boost having lost each of their previous four games, conceding 12 goals along the way and scoring none.

They were not entirely convincing while stopping the rot here, surviving a few scares as their former player James Vaughan passed up chances.

But Everton fans will certainly be glad to have had a few things to cheer about here, particularly with Calvert-Lewin showing his predatory instincts after a period in which the club’s failure to really replace Romelu Lukaku, despite the considerable spend of the summer, has appeared glaring.

There was also plenty of appreciation for Niasse’s contribution as the Senegal forward returned in style following his time being frozen out.

Arsenal made heavy weather of seeing off Doncaster with Theo Walcott scoring the only goal on a night where the returning Jack Wilshere stood out for the Gunners.

Arsene Wenger made 11 changes from the side that drew at Chelsea on Sunday but included the likes of Alexis Sanchez and Olivier Giroud in a team that still boasted eight full internationals.

Wilshere was one of them and he starred on his first Arsenal start in 493 days, although it was Walcott who grabbed the vital goal to seal a comfortable but unspectacular 1-0 win.

Doncaster, managed by Darren Ferguson, who was watched on from a record-low Emirates Stadium crowd by his father and Wenger’s former adversary Alex Ferguson, created very little but did keep Arsenal at bay for large parts.

Horse racing is in the doghouse, but remains a magnificent triviality 06:00
My favourite sporting moment: Donegal and Kildare’s high summer street opera 06:00
TV View: Potters Corner wins the National without leaving Wales 06:00
Ken Early: Mick McCarthy II was no blockbuster, more of a flop 06:00
Angling Notes: No specific restrictions yet on recreational angling 00:00

1 Man City to investigate Kyle Walker over lockdown sex party
2 Cigala caught in the crash as cycling’s Zwift League series heats up
3 Potential Robbie Keane exit could prove costly for FAI
4 Ken Early: Mick McCarthy II was no blockbuster, more of a flop
5 Horse racing is in the doghouse, but remains a magnificent triviality
Real news has value SUBSCRIBE