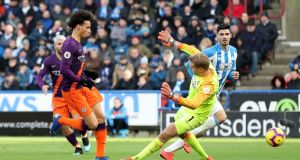 For a team with Manchester City’s ambitions, Huddersfield were obliging opponents. Pep Guardiola’s team duly took advantage of a side whose toes seem tagged for the relegation morgue and, in the process, renewed their threat in the title race. The gap at the top of the table is back to four points and the message for Liverpool is loud and clear: it is going to be a heck of a job to shake City off.

Not that this was the most devastating performance City will deliver this season. Indeed, they might reflect it was a missed opportunity to add even more sheen to their goal difference. Yet it is difficult to be too critical when the truth was Guardiola’s men could win with something to spare despite a performance, by their high standards, that seldom got above six out of 10.

It is 386 minutes now since Roberto Firmino became the last player to score against City and, in that time, the reigning champions have now scored 23 times in all competitions without a single one coming back the other way. It works out at a goal, on average, every 17 minutes and, if anything, it was probably a surprise they did not add more goals against a Huddersfield side put together by a caretaker manager, Mark Hudson, with the club close to announcing David Wagner’s replacement will be the 36-year-old Jan Siewert, currently in charge of Borussia Dortmund Under-23s.

City were also denied a clear penalty, with the game goalless, when the referee, Andre Marriner, missed Terence Kongolo’s foul on Raheem Sterling and, to Guardiola’s irritation, they might even have allowed a touch of complacency to creep in once Danilo had got lucky for the opening goal.

Maybe it was too straightforward for the away side. Too easy, even. Perhaps it was a direct consequence of neither David Silva nor Bernardo Silva starting the match. Yet City did have Kevin De Bruyne and Ilkay Gündogan in that garish purple and orange kit – two colours that really should not be seen together on a football pitch – and it would have been reasonable to think Sergio Agüero’s focus might have been sharpened by the fact he had been chosen ahead of Gabriel Jesus, the scorer of seven goals in his last three matches.

Whatever the reason, it was certainly unusual to see the reigning champions take the lead, then drop their tempo rather than pouring forward again, in the way that is expected of such a team. For the remainder of the first half, anyway. Guardiola, one imagines, had a thing or two to say about it at half-time and City quickly put that right with the goals from Sterling and Leroy Sané in the 54th and 56th minutes.

Early on, City had looked like a side in a hurry and Huddersfield were looking hassled even before that moment, 17 minutes in, when Danilo took aim from 20 yards and Christopher Schindler inadvertently diverted the shot into his own net. Schindler was stooping down in an attempt to head the ball clear, but got his angles badly wrong and that was City’s 100th goal this season in all the various competitions, the most impressive scoring statistics of any side in Europe’s major leagues.

Not that they were finished there. City might have been conspicuously below their best but it soon became clear why their opponents had managed only 13 league goals all season and Huddersfield’s afternoon did not really get any better from the moment, before kick-off, when they tried to play a farewell message from Wagner on the big screen, the sound failed and the public announcer had to ask the crowd to lip-read.

Huddersfield did at least put that right at half-time and their crowd, as always, remained fully supportive, appreciative of the team’s efforts to bridge the gulf between the two sides. That, however, was a thankless task for a team that is 10 points adrift from safety, rooted to the bottom of the league.

Sané, the game’s outstanding performer, set up Sterling to double the lead with a diving header inside the six-yard area. Sane had been marginally offside in the build-up but Huddersfield could not complain too vociferously after the penalty controversy from earlier in the match and there was no argument about the next goal.

This time it was Sané running through the middle, latching on to Agüero’s flick-on, to slip his shot past Jonas Lössl and Huddersfield’s shortcomings this season were probably summed up by the final kick of the match being a spectacular miss from the substitute Steve Mounié. He was in the six-yard area at the time but still managed to put the ball wide and, at the final whistle, the supporters here must have wondered how long they might have to wait before City visit this place again. – Guardian