Ole Gunnar Solskjaer tells players to be proud of form

‘I don’t care whatsoever about records, I’m never bothered about these things’ 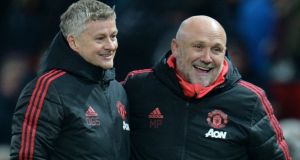 Manchester United caretaker boss Ole Gunnar Solskjaer was full of praise for Marcus Rashford after the 2-1 win over Brighton.

Rashford scored a superb goal to put his side 2-0 up in the Premier League contest at Old Trafford and caused the Seagulls plenty of other problems as United’s perfect start under Solskjaer extended to a seventh game in all competitions.

The 21-year-old England international, who expertly turned away from Pascal Gross before curling a fine shot into the top corner, has netted five times in six league matches following the Norwegian’s appointment in December.

And when he was asked if he thought Rashford was currently the best centre-forward in the division, Solskjaer said: “You can argue for many strikers but I’m glad he’s in my team.

“Harry Kane’s injured so maybe that gives him a better chance to be the best one at the moment.

“He made a chance for Jesse (Lingard) and I cannot believe how Jesse didn’t score on that chance at the back post.

“So at the moment I think he’s playing the best football in his career.”

Rashford’s 42nd-minute goal, on his 150th United appearance, came after Paul Pogba had opened the scoring with a penalty he won himself. The midfielder has also scored five times since the Red Devils sacked Jose Mourinho and brought in Solskjaer.

Pogba reprised his stuttering spot-kick run-up and Solskjaer said: “He has scored quite a few goals hasn’t he, so if he’s comfortable with it, as long as the ball goes in the net...

“I wouldn’t have done it that way but the way he strikes the ball is good enough.”

After Gross pulled a goal back in the 72nd minute, it was a nervy conclusion for the hosts but they managed to see out the victory as Solskjaer became the first United boss to win his first six league games.

The 45-year-old is the third manager in Premier League history to win their first six matches in charge of a club, after Carlo Ancelotti and Pep Guardiola at Chelsea and Manchester City respectively.

“We made it more difficult than it should have been the last 20 minutes, because up until then I thought we played some great stuff at times,” said Solskjaer.

“The players have to be proud of the form and momentum they are building.

“I don’t care whatsoever about records, I’m never bothered about these things. But of course to be part of a team winning so much feels great, and the confidence that grows in that dressing room, I think the team spirit kept them away from losing points today.”

While United are sixth, level on points with fifth-place Arsenal and three behind fourth-placed Chelsea, Brighton are 13th.

“Credit to a group of players that seized the opportunity to get back in the game.

“But then you know you’re not going to get so many moments and in those moments you have to show quality, and we probably just lacked enough.”