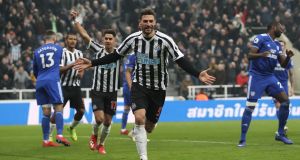 Cardiff replaced Newcastle in the bottom three after two goals from Fabian Schar helped Rafael Benitez’s men cruise to a 3-0 win over the Bluebirds on Tyneside.

Schar opened the scoring in the 24th minute and added his second just past the hour-mark before Ayoze Perez wrapped things up with the Magpies’ third in injury time.

Southampton also secured three valuable points as they held on to defeat Everton 2-1 at St Mary’s.

The Saints twice hit the woodwork in the first half and looked set for another frustrating afternoon until James Ward-Prowse broke the deadlock with a brilliant finish after 50 minutes.

An own goal from Lucas Digne extended the hosts’ lead and they secured a deserved win despite Gylfi Sigurdsson setting up a nervous finish with a late finish.

Andy Carroll missed a sitter as West Ham slumped to a 2-0 defeat at Bournemouth.

Carroll missed from a yard out early in the second half when it looked easier to score and the home side punished his profligacy when Callum Wilson put them ahead in the 53rd minute.

Burnley were left feeling aggrieved after battling out a goalless draw against Watford at Vicarage Road.

The Clarets had the better chances throughout and thought they had won it at the death only for Chris Wood’s effort from point-blank range to be ruled out for offside.

In the early kick-off Diogo Jota became the first Wolves player to score a Premier League hat-trick in a dramatic 4-3 win over Leicester.

Jota and Ryan Bennett scored to give the hosts an early 2-0 lead only for Demarai Gray and a Conor Coady own goal to pull the Foxes level.

Jota’s second was cancelled out with three minutes remaining by Wes Morgan but there was still time for the Portuguese striker to grab the winner in the third minute of injury time.

1 Tipping Point: DeChambeau’s transformation raises questions, but who will ask them?
2 Klopp to rest Lallana to ensure he remains fit for transfer
3 Pete Sampras: The forgotten great with the best serve in the business
4 Game Changers: Vincent O’Brien, a pioneer who took Irish racing to the world
5 The unsolved mystery of Goran Ivanisevic’s stunning Wimbledon win
Real news has value SUBSCRIBE