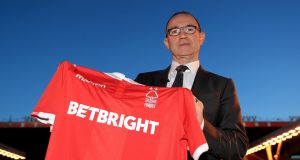 Martin O’Neill, the new Nottingham Forest manager, poses with a shirt after a press conference at the City Ground, Nottingham. Photograph: Mike Egerton/PA

But the memory of his performance was incidental. O’Neill’s primary recollection is of the jersey he wore that night.

“We got our own shirt,” O’Neill recalled. “I remember showing it to my younger brother Owen when I came home. We were so pleased with the shirt, the badge. We washed it the next day, got it ironed.

“Honestly, you know what – I’m going to say this – that cap, that amateur shirt, is as important to me as any of the shirts I’ve worn since. It represented a breakthrough.

“It was green, round neck, the IFA badge on it, a proper shirt. It felt heavy enough, not too heavy, just nice.”

Towards the end of O’Neill’s tenure with Ireland, there seemed to be a lot of people bored or dissatisfied with his stories from the past. The relevance of tales from the 1970s and 80s felt questionable to critics and old when compared to his Irish squad in 2018.

But anyone who cannot see and enjoy the enthusiasm in the anecdote above needs to – in Belfast parlance – wind their neck in.

Admittedly O’Neill did not reveal this aspect of his personality too often as Irish manager, but that does not mean it is not there – he told this story two years ago.

Remember, this is someone who chased after Eusebio on his full Northern Ireland debut. As Portugal’s hero had already swapped shirts, and O’Neill was desperate for a memento, he pulled up Eusebio in the tunnel and pointed to his shorts.

“And he took his shorts off!” laughed O’Neill, “went into his dressing room in his underpants. “Great shorts, wee stripe down the side of them.”

Anecdotes do not win matches of course. But the point is that if O’Neill can bring this kind of boyish enthusiasm to his new role at Nottingham Forest, and to a squad that seems uncertain of its quality but which is only four points off the Championship play-offs, then he has, at 66, a real chance of a last-project hurrah.

It will not be straightforward – Forest have won nine of 27 league games – and this is a club that, for all the glorious history of which O’Neill was a part, has not been in the Premier League for 20 years. In May 2017 Forest avoided relegation to League One on goal difference.

These facts are more relevant than beating Malmo in 1979 when Brian Clough was in charge. Also more relevant is that there have been 11 different Forest managers since 2011 when Steve McClaren succeeded Billy Davies and lasted four months. Recall Steve Cotterill’s nine months? Alex McLeish’s six weeks? Philippe Montanier? Mark Warburton?

The club has had three different owners in the past decade. Now it is Evangelos Marinakis, a Greek businessman and politician who owns Olympiakos. He is ambitious. The Premier League is his aim and he flew to Nottingham unexpectedly in October to remind O’Neill’s predecessor Aitor Karanka of that.

O’Neill has 18 months to achieve it, though Karanka probably thought that too.

But this is the background. In front of O’Neill there are positives. For a start, in contrast to how he felt as Irish manager, O’Neill’s task will not be to overachieve with Forest: it will be to see the team reach its potential. Should they do so, they will win matches.

Marinakis has invested money. Forest spent €17m on Benfica midfielder Joao Carvalho last summer. They spent €6.8m on Lewis Grabban from Bournemouth and he has 14 goals.

Marinakis was said to have been “blown away” by O’Neill’s enthusiasm and may prove it in the transfer market.

So this is not O’Neill considering Ireland v Belgium in Bordeaux, this is Nottingham Forest v Championship clubs with smaller budgets.

Forest will not begin games on the back foot. They are favourites to beat Bristol City today and they will be favourites to beat Wigan next Saturday. Both matches are at the City Ground as is the Brentford game in three weeks. The fixture list has been kind – three home games in the first four.

That should jump-start O’Neill’s management. Of the clubs above them, only West Brom and Sheffield United have to be played away. This is not like asking Hendrick and McCarthy to match Kroos and Gundogan.

Germany were beaten that night at Lansdowne Road and it brings you back to the most significant Clough story of them all. It wasn’t even a story, it was a remark made by O’Neill to Paul Kimmage before Euro 2016 regarding Clough: “He got his credibility from winning”.

Forget all the maverick tendencies and the one-liners, O’Neill was saying, Clough’s status was derived from his success at Derby County and then Forest. It was the same for O’Neill after the Bosnia play-off and Robbie Brady’s goal in Lille. As he said of the Italy win: “There was the credibility that comes with victory, as Clough had demonstrated.”

It is pragmatism, realism to add to enthusiasm.

What happened in those last 12 months with Ireland was that the winning stopped and the Denmark defeat was heavy, too heavy, not nice.

That brought scepticism and criticism. O’Neill retreated, ended up declaring how good he was.

He has the chance to show it again. This is a decent hand he has been given at Forest. The Championship is often described as unrelenting and draining, less often as mediocre – six points separate Bristol in seventh place and Stoke, 15th.

This season, however, the bar has been raised by Marcelo Bielsa. The common phrase that it’s all about the players – their limits dictate what can be done – has been contradicted by Bielsa’s work at Leeds United.

Bielsa has taken seven of the most-used outfield players from the Leeds squad which finished 13th last season with 60 points and remoulded them into the core of a Leeds team which sits top of the Championship with 54 points already. It’s not been about the players, it’s been about what you do with them.

Funnily enough, for all the tactical emphasis, “enthusiasm” is a word Bielsa has used frequently over the past six months.

O’Neill has got it and Nottingham Forest have got it back – the club have reported a surge in ticket sales and today is sold out. That’s before Roy Keane arrives.

O’Neill joined Forest eight months after that amateur international in 1971. Nearly half a century on, will the shirt fit again?