O’Neill remains hopeful Keane will be his assistant at Forest 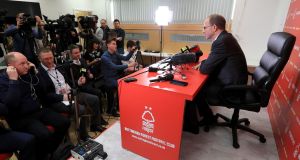 Martin O’Neill remains hopeful that Roy Keane will join him as assistant manager at Nottingham Forest but says that, after some preliminary discussions, the Corkman is still weighing up his own position.

“I would dearly like him to join us,” said O’Neill as he was officially unveiled as the new manager of the Championship club. “Since this has happened very quickly, he has a number of things to sort out himself but we have had some discussions here and I would genuinely like him to join us. I’m hoping it may happen, it may not; he has a number of things that he has to consider himself both professionally and personally, but he will keep me informed.

“I would dearly like him to join up,” he continued. “He was a great asset to me when I was the manager and he was the assistant manager of the Republic of Ireland; we had some really great days.

“He could be tough to handle, there’s absolutely no doubt about that but you know that about him. He was pretty special; a special player, he drove Manchester United on for 10 years and he didn’t win those things by just sitting around.”

With or without Keane, O’Neill acknowledged that his time back at the City Ground will be judged on one thing and one thing only; his ability to guide the team back to the top flight after a 20-year absence.

“I don’t think there’s any other reason to be here,” he said. “I think they [the club] want to drive on. The team has slipped a bit in recent times but hopefully we will be able to rectify that.

“The obvious hurdle is that you have to get to know the players pretty quickly, this is not a pre-season; it is not a situation where you can take five or six weeks to sort out a lot of stuff. I’ve got to get to know the players very well and I have to try to do that in ultra quick time. But that’s okay, it’s not a major problem. There are a few injuries, a few suspensions, to overcome as well but overall this is what I want to do.

“If it doesn’t happen . . . I’m here for 18 months and if I can’t get the club up then I will gladly hand it over to somebody else to see if they can do it.”

O’Neill confirmed that he had been offered the Forest job before but said that the time had not previously felt quite right to return to a club where he spent a highly successful decade as a player.

“I have had a number of chances but I wasn’t sure whether it was the right time,” said the 66-year-old. “One is never sure about when the right time is but now I have this opportunity to do it and I might not get the opportunity again and so I might as well make the most of it.

“You make decisions in your life and you hope that they turn out right or that they are the right decision but you don’t know at the time. But obviously having had that opportunity in the past and not taking it, I probably feel, here it is. I probably felt that the timing on those other occasions wasn’t quite right – that covers a multitude of things – but overall, it’s great to be here and I’m raring to go.”

His own personal history with the club will make his appointment a popular one with the club’s fans and he seemed comfortable with the idea of following in the footsteps of the manager he played under, Brian Clough, a man with whom he had a sometimes difficult relationship.

“He was special to a lot of the people,” said O’Neill. “My moments with him weren’t always gracious but overall I learned a great deal from him as a player. It’s a very special place and naturally not many clubs have won two European Cups so that is particularly special. And [he is] a tough old act, I must admit, to follow but we’ll try to our very, very best.”