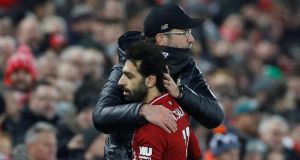 Liverpool’s Mohamed Salah is embraced by manager Jurgen Klopp after being substituted during the win over Crystal Palace. Photograph: Reuters

Liverpool manager Jurgen Klopp hailed a “world-class” Mohamed Salah after the Egypt international brought up his 50th Premier League goal in a 4-3 win over Crystal Palace.

The forward’s two goals made it 50 in 72 matches — the same as former Reds favourite Fernando Torres, an out-and-out striker — and a record only bettered by Ruud Van Nistelrooy, Andrew Cole and Alan Shearer.

“Wow, an outstanding number. I heard the names of the other players who got there a bit quicker — Alan Shearer, Ruud Van Nistelrooy, Andy Cole — good strikers as well eh?

“Maybe he would have scored more and earlier if I hadn’t played him on the right wing so often. My fault.

“But no, not bad. (He has) helped us a lot. It’s a typical win-win situation. He benefits from the style of play, and the boys benefit of course from his scoring desire. It’s cool.”

Klopp also praised the character of his players after bouncing back from Andros Townsend’s opening goal and then recovering again when James Tomkins made it 2-2 with 25 minutes to go.

However, they still needed to survive a manic conclusion which saw James Milner sent off for a second bookable offence on Wilfried Zaha before Sadio Mane and Eagles substitute Max Meyer traded goals.

Asked if he thought it was chaotic, Klopp said: “Oh yes. Someone asked me what was the main feeling, the main emotion at the final whistle. It was relief.

“I have known the boys since 2015 and I have found boys with outstanding character.

“It’s not the first time this season we had to do it, but today it was pretty special and I really liked it.”

Victory extended their lead at the top of the table to seven points for 24 hours at least with Manchester City at Huddersfield on Sunday.

The other landmark was for the Premier League only: a 32nd consecutive unbeaten home league match — coincidentally Palace were the last team to win at Anfield in the league in April 2017.

Palace boss Roy Hodgson, returning to the club where he had an ill-fated six months in charge in 2010, felt they should have had more from the game.

“For large periods of the game we held our own but you need a bit of luck if you’re going to win,” he said.

“Goals often have an element of luck involved in them and their three certainly had a bit more luck in them than ours did.

“I’m very happy with how we went about our business and I’m very disheartened for the players that they didn’t get more to show for their efforts.”

Hodgson refused to blame 39-year-old goalkeeper Julian Speroni on his first start since December 2017 for his handling error which gave Liverpool the lift they needed at 3-2.

“A goalkeeper comes back after not having played for a year and a bit (but) there aren’t many better club servants than Julian Speroni at any football club in the world,” he added.