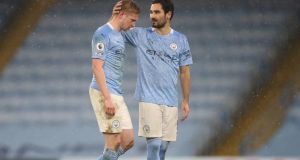 Kevin De Bruyne leaves the pitch as his Manchester City team-mate Ilkay Gundogan comforts him during the Premier League match against Aston Villa at the Etihad stadium. Photograph: Martin Rickett/EPA

Manchester City midfielder Kevin De Bruyne will be out for four to six weeks due to an injury he picked up against Aston Villa, manager Pep Guardiola said on Friday.

De Bruyne, 29, looked to have sustained a leg muscle injury and was replaced on the hour mark at the Etihad Stadium in Wednesday’s 2-0 Premier League win.

“Kevin, like the doctor said today after reviewing the scan, will be four to six weeks out,” Guardiola said before Saturday’s FA Cup fourth-round tie at fourth-tier Cheltenham Town. “It’s a big blow, but we have to move forward.

“I’m not saying anything that anyone doesn’t know, it is unfortunate for him and for us and we have to find a solution because everyone in their own life is struggling in the situation we are living and we have to adapt.”

Kyle Walker will be absent for the FA Cup tie after he was also forced off against Villa following an impact injury.

Guardiola was more optimistic about his availability after the trip to the Robins, adding: “Kyle had a big impact kick in his hips, but it was just a kick. He’s not available tomorrow but maybe for the next game.”

Sergio Aguero will also be absent after revealing on Thursday he had tested positive for coronavirus.

Guardiola added: “What we wish is for him to feel better. He felt uncomfortable for two or three days after his positive test, he felt quite tired and had symptoms. But he feels well and we want him to come back.

“For a long time we’ve missed our best striker. Like with Kevin we will have to manage until they come back.”