Man Utd sign Cavani, Telles and Traoré but miss out on Sancho and Dembélé 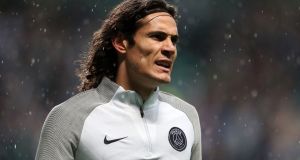 Manchester United signed Edinson Cavani on a free and Porto’s Alex Telles for €17 million but failed in their window-long targeting of Borussia Dortmund’s Jadon Sancho, with a move to loan Barcelona’s Ousmane Dembélé instead to fill the right-wing berth also unsuccessful on a busy deadline day.

The 33-year-old striker Cavani and Telles, a 27-year-old left back, took Ole Gunnar Solskjær’s major signings to three, Donny van de Beek having previously been bought for £35 million. Cavani will provide competition for Anthony Martial at No 9 and aid the development of 18-year-old Mason Greenwood.

Cavani said: “I look forward to continuing to write my little story inside the book of football and my focus has to remain the same as always – work, work, work. I have had a conversation with the manager and this has increased my desire to wear this beautiful shirt.”

Solskjær said: “He’ll bring energy, power, leadership and a great mentality but most importantly he’ll bring goals. He has had a brilliant career so far, winning trophies at almost every club he has played for, and he still has so much more to give at the highest level.”

Cavani has enjoyed a glittering career, claiming the Golden Boot in Ligue 1 and Serie A, having scored 341 goals at club level since moving to Palermo in 2007, 35 of these in the Champions League. At Paris Saint-Germain, his last club, Cavani won six league titles, his 200 goals making him their record goalscorer. In 2011 Cavani won the Copa America and has 50 goals in 116 appearances for Uruguay.

Going the other way was Chris Smalling, the defender sold to Roma, who filed the requisite paperwork with the Italian football association a minute before the 7pm deadline. The 30-year-old ended a decade at United with a transfer worth €15 million plus €5 million in add-ons, approximately negating the fee paid for Telles.

The bid to acquire Sancho finally ended as a result of Dortmund’s €120 million valuation being viewed as unrealistic by United owing to the coronavirus-affected market. But Solskjær may have been particularly disappointed in the move for Dembélé ending in failure and no other wide-right player being acquired because the United manager had identified the position as a priority when the window opened.

United also bought the 18-year-old Facundo Pellistri from Atlético Peñarol for about £10m and agreed a deal to sign another teenage winger, Atalanta’s 18-year-old Amad Traoré for €30 million plus add-ons, though he will not join until January. Traoré had been set to sign for Parma on loan – the club having announced so on their social media channels – before United made their move early on deadline day.

The Ivorian winger, who scored on his Serie A debut last season, is set to join United in January with a work permit pending. He has been on the bench for Atalanta’s three league games this season.

The Atalanta forward Papu Gómez recently said of Traoré: “He’s a future star, trust me. During our training sessions he plays like Messi! You can’t stop him, he’s unbelievable, our centre-backs have serious problems when Traoré is on the pitch . . . . he’s fantastic!”

Regarding Telles, Solskjær expressed contentment at the 27-year-old’s acquisition, the Brazilian agreeing a four-year contract with an option of a further one. “First and foremost I welcome Alex to United. He is a player we have been tracking for some time and his performances over the past few years are exactly what we are looking for,” the manager said.

“He is a fighter and a winner and will add real determination and competition to the squad. Alex has the qualities, both as a player and as a person, that we want here at Manchester United.”

Telles said: “To join a club with the prestige of Manchester United is a huge honour. You have to work hard to get to this moment in your career and now I am coming to this club I can promise I will give everything in my heart to be a success at Old Trafford.

“I won many trophies at Porto and I want to continue that at United. The manager has a clear plan and direction for this team and I can’t wait to pull on the famous shirt.”

United also announced the signing from Sochaux of the centre back Willy Kambwala, who will join the under-18s squad.

Arsenal signed Thomas Partey after Atletico Madrid announced the midfielder’s reported €50 million release clause was met by the Gunners with minutes to spare.

The 27-year-old Ghana international played 35 times last season for Atletico, who say the Gunners put in a bid that matched his release clause with 32 minutes remaining in the window.

“The player has therefore unilaterally terminated his contract with our club, which ran until June 30, 2023.”

Uruguay midfielder Lucas Torreira has moved in the opposite direction, joining the La Liga club on a season-long loan.

Partey has signed a long-term contract with the Gunners.

Manager Mikel Arteta said: “We have been watching Thomas for a while, so we’re now delighted to add such a high quality player to our squad.

“He is a dynamic midfielder with great energy. He brings a lot of experience from a top club that has competed at the highest level in La Liga and the Champions League for several years.

“We’re very impressed with his attitude and his approach to the game. He’s an intelligent footballer and we’re looking forward to him integrating into our system and contributing to the progress we’re building at the moment at the club.”

Another of Arsenal’s midfielders, Matteo Guendouzi, has signed for Hertha Berlin on a season’s loan. Guendouzi has been out of favour since June and Arteta, exasperated by various issues with the player, has been keen to move him on. Hertha are understood to have paid a loan fee but there is no obligation to buy.

Meanwhile, Republic of Ireland midfielder Josh Cullen has joined Belgian side Anderlecht for €880,000 on a permanent move from West Ham. The 24-year-old spent the last two seasons on loan at Charlton.