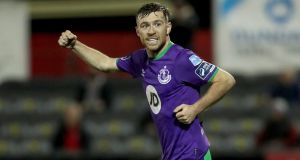 Jack Byrne and Derrick Williams have been called up to the Ireland squad for the games against Slovakia, Wales and Finland while Robbie Brady and Callum O’Dowda are both included despite missing recent club games.

“Callum O’Dowda started back training on Saturday,” said manager Stephen Kenny as the squad was announced at the FAI’s offices in Abbotstown. “Robbie Brady missed the game on Sunday with a rib injury so we’ll have to see how he goes but there a bit of distance still to go before the players are due to meet up on Sunday so we’ll see how it goes.”

Troy Parrott misses out through injury while Dara O’Shea of West Brom, who was drafted into the squad for the opening Nations League games against Bulgaria and Finland, misses out again at this stage.

“Troy is injured,” Kenny confirmed in relation to the Tottenham striker who suffered a setback while making the first competitive appearance of a loan spell at Millwall. “He’s been very unfortunate. He came back from a thigh injury and injured an ankle in the game last week so he has been very unfortunate. I’m not quite sure how long he will be out.”

Byrne, meanwhile, is back having been omitted for the game at the start of this month.

“I think I’ve been consistent,” explained Kenny. “We have increased the squad from 23 to 25 but we have three games this time.

“The three games will be taxing, the players have never had that in a window before but I think the 25 players is adequate. Jack played well against AC Milan and followed that up with two goals (against a weakened Dundalk side) at the weekend, he’s a very talented player with a good range of passing so he is in the squad on merit.”

As for the return of Williams, Kenny said that: “Derrick is a terrific footballer, a very good footballer. He was a left back for a long time but he has been playing as left centre back with Darragh Lenihan (at Blackburn Rovers) so it’s good to have that versatility in the squad.”

The Dubliner said that he has been impressed by what he has seen of Slovakia and that after having gone “several years” without a big win away in a competitive game that Ireland will have to do something “extraordinary” to qualify for the European Championships. He said he was happy, however, that many of the players will be fitter than they were a few weeks ago for the Bulgaria and Finland games and he insisted that the entire squad will be ready for all of the games.