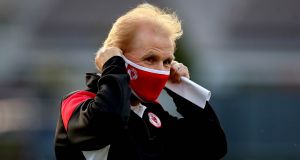 Liam Buckley returns to Shamrock Rovers on Friday knowing that the Dubliners have all but wrapped up the title but hopeful that his fairly in-form Sligo side can delay his old club’s celebrations by a week or so slightly further down the line.

Sigitas Olberkis, John Dunleavy and Danny Kane will all miss the game in Tallaght but David Cawley is back from suspension. For the hosts Roberto Lopes will be absent after struggling in training this week with the hamstring injury that sidelined him for the Dundalk game.

The problem may yet force the defender to pull out of the Cape Verde squad for friendly games against Andorra and Guinea but his club manager, Stephen Bradley, has not ruled out the prospect of the Dubliner travelling as, he says, “he is not a million miles away.”

Buckley and his players have no such distractions as they head into their 15th game of the season in fourth place.

After a terribly slow start to the season, the visitors have taken 19 points from 10 games since the restart and suddenly find themselves in contention for Europe. Buckley sounds as philosophical about the situation now as he did when the club was shutting up shop back in March without a point on the board, which is not to say he would be averse to some tangible success between now and the end of November.

“People are mentioning Europe now but I prefer not to think about it,” he says. “If we work hard, which we do, and keep winning a few games then we can step back in a few weeks’ time, take a look at the situation and hopefully we’ll be in Europe. If you start dreaming about that sort of thing now, it can sometimes distract you from the work that has to be put in.

“We have the cup to come too, though. We have Derry at home and if we can win that we’re in the last four and then anything can happen so we have plenty to play for and we’re happy enough with the way we are going just now. We’re not the finished article, that’s for sure – both Cork and Finn Harps, the bottom two have beaten us – but some of the performances recently have been quite good.”

The slow start he puts down to a few injury problems in the one area of the pitch but he sounds happy with the way the team came through the bad spell and the wider club and community have been dealing with the bigger issues right now.

“John Mahon had broken his leg, Lewis Banks had a groin problem, Regan Donelon dislocated his shoulder and John Dunleavy was out so we were down a few defenders. Now, we’re a bit more competitive.

“It’s been tough for everyone at the club but people have been fantastic, the fans, the community...they’re very conscientious, very supportive of the club and each other. It’s a great spot.”

His former club, he acknowledges, are in a good place as well right now.

“It (the title race) is done,” he says. “There’s nobody out there now who doesn’t think that they’ve won it. And I’m delighted for them... I had my best days as a player there, I was flying, and some good days as a manager even if I didn’t enjoy it when we were struggling to get certain things done at the end, but I have a lot of time for the club and they’ve earned their success this season, they have a real style of their own about them, the way most winning teams do.

“The wider set up is impressive as well. With the first team, they’ve brought in players from a lot of other clubs but they’ve also put together the academy and brought some really good players through. We try to do that up here too because you can’t keep looking to bring all your players in from outside every year and there would be a few lads here we feel are real prospects for the future.

“For now, though, we are looking forward to going to Tallaght and trying to put together a game plan that gives us a chance of getting something out of it. It would be great to push on for Europe but we’re still looking over our shoulder too.”

Having lost at the Showgrounds on Wednesday, the second occasion in the space of a few days in which their opponents won thanks to goals late on, Derry are back to full strength for the visit of Waterford in the top flight’s earlier game.