Finn Harps and Cork share the spoils in basement battle 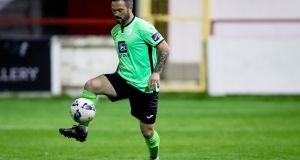 Cork City were 15 minutes away from chalking up a first away win of the Premier Division campaign that would have lifted them off the bottom of the table.

But veteran Raffaele Cretaro struck with the equaliser for the hosts to cancel out Dylan McGlade’s 57th minute strike in an entertaining basement battle at Finn Park.

And so, with games running out, City remain at the foot of the table - although they do have a game in hand on the Donegal side.

Harps enjoyed a decent spell during the mid-point of the first-half and City were fortunate to survive a couple of scares after Karl O’Sullivan had forced Mark McNulty to go full stretch to save.

Firstly, Kosocar Sadiki was just unable to get the telling connection from close range as he tried to meet a Barry McNamee corner, and then Mark Russell found Austrian striker Alexander Kogler deep inside the box but from a promising position he steered the ball badly wide when he should have done better.

On 33 minutes, McGinley had to scamper across his goal to make a vital save as he managed to get a hand onto a Coleman header following a good cross from Deshane Dalling.

But the save of the half came on 36 minutes as Dylan McGlade, who was becoming increasingly influential, fired goalwards. McGinley was equal to the task with a fine one handed reflex save.

Cork went ahead on 57minute with McGlade’s goal putting them into the driving seat and on course for what would have been a first away win of the season.

But Cretaro then levelled the scores in the 75th minute with a low shot from outside the box.

Stephen Folan then went close with a free for Harps while substitute Adam Foley was not far off target with a shot from inside the box.

In the end a draw was a fair result.