Italia 90 Revisited: There’s one thing nobody can fudge about Jack Charlton 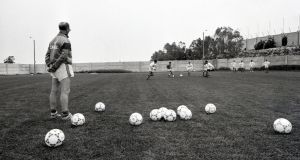 June 30th, 1990: On the eve of Ireland’s quarter-final against Italy, Mary Holland marvels at the team spirit that Jack built

“Aren’t you a bit old to be developing into a football groupie?” a friend asked coldly. I’d asked for the television to be turned on during the England v Belgium game, thereby interrupting a discussion on the innermost secrets of Peter Brooke’s strategy, or the state of the Irish novel or some other such trivial issue.

It was a well aimed shot but then, if there’s one thing on which everyone seems to be agreed, it is that all this - the wild delirium in the streets, the agony and the ecstasy of the onward march to Rome - isn’t simply about football. It’s not my intention to question the power of sport to change our lives but there must (mustn’t there?) be more to it. Otherwise, why the sunny smiles on the faces of industrialists facing lost production and the soothing reassurances of bank managers on the subject of granting extra credit?

As to what exactly it is all about, there exist as many theories as there are people who now hold conversations with total strangers, wearing soppy smiles as the Irish team comes miraculously through another round.

Here, for what it’s worth - which I hasten to emphasise isn’t much - are the reasons for my particular soppy smile, for the tears shed in The Irish Times sports room as the tension grew unbearable last Monday.

The whole relationship of the Irish public to the Irish team seems to me to be shot through with richly ironic contradictions.

Nobody talks about them now but, like the yeast in the dough, they will settle and work to lighten our attitudes for years to come. Take the relationship with Jack Charlton and the mythology we’ve constructed around him. Like most other people the one story I know about Charlton is how he applied to manage the English team 12 years ago and didn’t get as much as an acknowledgment for his pains. We, on the other hand, appreciated his sterling qualities and asked him to manage Ireland.

Or so we like to think. Now I’ve been told by a more knowledgeable friend that it wasn’t like that at all. Far from being the favoured candidate, he got the job - wouldn’t you know - because of some fudge with the votes. But there’s one thing nobody can fudge about Charlton. He is cussedly, awkwardly, irredeemably “a Brit “. He wouldn’t know the Blarney Stone if it bent down and kissed him.

The fact that this big Geordie has presided over a veritable explosion of joyous and benign patriotic fervour is going to complicate attitudes. Who’s going to shout “Brits Out” now or, more important, continue to believe with quite such certainty that the connection with England is the source of all our difficulties?

That brings us to the team.

Elsewhere on these pages Andy Pollak celebrates the polyglot background of the Irish players, the number of them who are in Rome because they are the children and grandchildren of emigrants. It’s a pleasure I share.

As the child of emigrants myself it can still sting when some native born son of Erin withers me with the phrase “Sure, what would you know?”

Perhaps it’s fanciful but it’s also possible that this shared experience of emigration gives the team another strength. Like anyone suffering from symptoms of serious infatuation I’ve taken to reading every word I can lay my hands on about the players. The day after the Romania match, when most cross-channel commentators were, as usual, criticising their style of play, here’s what David Miller wrote in the London Times. “The Irish have a secret: though it is there for anyone to see. They work harder and more selflessly for each other than any of the 24 finalists, of whom I’ve seen 19.

“This alleged bunch of woodcutters, weavers and water carriers are successful because they have epitomised the team spirit more than any side, except perhaps the Germans. The Irish keep doing things that surpass their potential rather than fall short of it.”

Now, there’s a tribute for the team that Jack built and food for thought, perhaps for the rest of us.