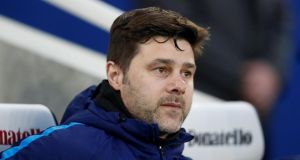 Spurs take on Manchester United in their semi-final at Wembley on Saturday and will be hoping to move one step closer to a first major trophy since 2008.

Their ascent towards the top of English football has been, according to some critics, undermined by a lack of silverware.

But Pochettino insists lifting the FA Cup in May would not be that big a deal in terms of where he is trying to take Tottenham.

“It’s fantastic if Southampton, Chelsea, Manchester United or Tottenham will win the FA Cup,” he said.

“We are going to try and fight to win.

“It would be fantastic to finish the season with a trophy. I don’t think it’s about need or not need.”

The Argentinian has always insisted that success in the Premier League, and as a result the Champions League, is a better gauge of how well teams are doing and he repeated that message.

“If we are capable to win the Premier League and the Champions League it is a moment you say the team has improved and reached the next level,” he said.

“Until that, win the FA Cup or the League Cup, it will be fantastic for our fans but is not going to move the club to a different level.

“If you are going to change the vision or put the club in a different level you must compete to win the Premier League and then to compete and then win the Champions League.”

Tottenham take on United at a ground they have played at all season, but which this weekend is classed as a neutral venue.

Spurs have made Wembley their home as White Hart Lane is rebuilt, leading to suggestions they have an advantage.

Pochettino’s men are technically the away team and will get changed in the east dressing rooms instead of the west.

“Now it feels different because we will share facilities with Manchester United,” Pochettino said.

“During the season only we own the stadium and we feel like home. Now we are going to share with Manchester United.

“Of course it’s special, it’s a different competition and sure that the atmosphere will be completely different to the Premier League.

“I don’t believe (it’s an advantage) because Manchester United have the experience to play in Wembley too.

Pochettino is set to bring Dele Alli back into the side after his midweek rest at Brighton, and he will decide whether to include Michel Vorm in goal as he has done for the FA Cup this season or stick with Hugo Lloris.