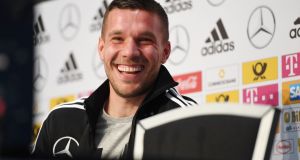 Germany’s Lukas Podolski: the midfielder will leave Turkey’s Galatasaray at the end of the season to join Japan’s Vissel Kobe in the J1 League. Photograph: Patrik Stollarz/AFP/Getty Images

Germany’s Lukas Podolski will receive an appropriate farewell when the world champions meet England in a high-quality friendly on Wednesday (7.45pm) with the winger having become one of the country’s all-time greats, coach Joachim Loew said on Tuesday.

The game is expected to provide a perfect stage with Podolski, who is hugely popular among German fans, set to earn his 130th and final cap and start as captain for the first time.

Germany will be missing several players through injury with Loew looking towards Sunday’s Group C World Cup qualifier in Azerbaijan with his side top after four straight wins.

The 31-year-old Podolski, who made his debut back in 2004, is his country’s third most-capped player and is also fourth in the all-time scorers’ list with 48 goals.

“He is a unique specimen, no one can really replace him,” Loew said. “For me it will be a beautiful moment but a sad one because he was one of the greatest players ever to come out of Germany.

“Lukas and myself have gone a long road together,” said Loew, who has coached Podolski for all of his 13 years with the national team as assistant coach and then head coach since 2006.

“We have gone over many hurdles, many tournaments, disappointments but also the biggest joy as coach and player with the World Cup victory in 2014. So the stage tomorrow is appropriate. Germany against England is the right atmosphere.”

The speedy winger, known as much for his powerful left foot as his jovial character, will continue in club football as he prepares to leave Turkey’s Galatasaray at the end of the season to join Japan’s Vissel Kobe in the J1 League.

“These 13 years were great and fun years and I am proud of them,” said Podolski, who was part of a talented generation of Germany players, including Bastian Schweinsteiger and Philipp Lahm, that emerged after 2004.

Asked by English reporters what made Germany so successful over the years, Podolski, who also played for Arsenal, Bayern Munich and Inter Milan among others, said it may have been sticking with the same coach over a decade.

“Maybe the main reason is that we have a good coach for more than ten years and after 2004 we started a road which maybe other nations did not start,” he said.

England have had six coaches over the same period.

“What happens in England at youth level I don’t know. But the players are getting stronger . . . and if they do not face Germany in a tournament maybe they can progress,” he said with a laugh.

Germany will be without the injured midfielder Mesut Özil, the winger Julian Draxler and the attacking midfielder Mario Gómez when they host England.

Löw said the trio were nursing minor injuries and would need a few days to recover with the world champions taking on Azerbaijan in a World Cup qualifier in Baku on Sunday.

Manchester United defender Phil Jones is out of England’s squad for the game against Germany and and the weekend qualifier against Lithuania after sustaining an injury in training.

Jones, who has 20 caps for England, has been sent back to his club for treatment. – (Reuters)

1 CVC cuts Six Nations offer by half to €165m as talks continue on new deal
2 Game Changers: Living beyond fear puts Alex Honnold above all others
3 Georgia and Fiji in line to join Six Nations sides in eight-team tournament
4 Law expert believes coronavirus may impact overseas recruitment by English clubs
5 Alain Rolland to step down from World Rugby position
Real news has value SUBSCRIBE
Crossword Get access to over 6,000 interactive crosswords