Liverpool in advanced talks to sign Salzburg’s Minamino for £7.25m 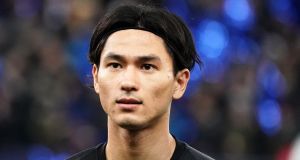 Takumi Minamino joined Salzburg from Cerezo Osaka in 2015 and has scored 41 goals in 129 league games for the Austrian side. Photograph: Getty

Liverpool are in advanced talks with Red Bull Salzburg to sign the Japanese forward Takumi Minamino for a fee of €8.54 million (£7.25 million).

The 24-year-old impressed Jürgen Klopp and the Liverpool players in the two meetings between the sides in the Champions League and the Premier League club are keen to take advantage of the low release clause in the player’s contract and get the deal done in January.

Salzburg sporting director Christoph Freund said on Thursday that the club had held discussions with Liverpool. “I can confirm that there are talks with Liverpool at the moment. It is an honour [for us] to see the calibre of clubs who are interested in our players.”

Minamino joined Salzburg from Cerezo Osaka in 2015 and has scored 41 goals in 129 league games for the Austrian side.

Liverpool qualified for the last 16 of the Champions League after the 2-0 win at Salzburg and face a hectic schedule in 2020 as they attempt to defend their European title as well as trying to win the English top flight for the first time since 1990. They are playing in the Carabao Cup and the Club World Cup next week and enter the FA Cup in January.

The Red Bull Salzburg striker Erling Braut Haaland is considering offers from Borussia Dortmund and RB Leipzig after visiting the two Bundesliga clubs but is expected to hold talks with Manchester United and Juventus before deciding on his future.

Dortmund and RB Leipzig are pushing hard to get a deal done in January, with the latter helped by having the same owners as Salzburg. The player has a release clause of about €25 million (£21.2 million) but Salzburg value the young Norwegian at closer to €60 million and would benefit from a bidding war.

Whoever signs Haaland would also have to pay a hefty commission to the player’s representative, Mino Raiola.

Haaland’s main priority is to find a club where he will start as many games as possible. The player and his family, including his father Alf-Inge, the former Manchester City and Leeds midfielder, are concerned that playing time would be limited at United, with Marcus Rashford and Anthony Martial there, and at Juventus, who have Cristiano Ronaldo, Gonzalo Higuaín and Paulo Dybala.

United and Juventus have not given up though and are two of the clubs in Europe who have the best relationship with Raiola. They are both prepared to offer the 19-year-old a lucrative five-year deal.

Haaland has scored 28 goals in 22 games for his club this season and it is more likely he will leave in the summer than in January. He joined the Austrian side from Molde for €9 million last January.