They have announced the signing for Under-21 international Darragh Leahy 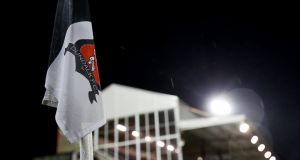 Dundalk won their fifth title in six years at the end of October. Photograph: Inpho

Due to its size as company, the club publishes abridged accounts and so little enough detail of their finances is provided but they do also confirm that the number of employees at the club rose from 29 to 36 and that the League of Ireland champions received €12,000 in government grants last year.

Total income at the club is not stated and it was not clear how much of the €500,000 earned in 2018 from participation in that summer’s Europa League had been received by the end of November.

The figure was slightly down on the €580,000 Dundalk earned in Europe the previous year but again the timing of the payments is uncertain, something that was highlighted earlier this year when it emerged that the FAI had held onto more than €2 million intended for the Oriel Park club but paid through the association for 11 months.

The club, which won its fifth title in six years at the end of October, earned €1.2 million in European prize money in 2019 after beating FC Riga in the Champions League qualifiers then losing to Qarabag in the next round and Slovan Bratislava in the Europa League.

They have, meanwhile, announced the signing for Under-21 international Darragh Leahy who had spent the last couple of seasons at Bohemians.

The Dubliner had returned home from Coventry city at the end of 2016 and had been one of the standout performers at Dalymount Park in the two campaigns he played there.

“I had a great two years at Bohemians,” he said on Thursday, “I enjoyed it very much and I will always be grateful to the coaching staff for giving me the opportunity to play in the league here.

“It’s a very proud moment for me to sign for Dundalk, though. I am delighted to get things done and it was good to get everything over the line. I just can’t wait to get started and looking forward to being here.

“I just want to keep winning here. I want to win trophies. We have a big year ahead of us and the Champions League to look forward to. It’s going to an exciting year and I am looking forward to competing.”

Assistant head coach Ruaidhri Higgins described Leahy, who was a regular for the Irish under-21s in their opening games of the current qualifying campaign before missing the more recent ones because of injury, as “a fantastic addition to the group not only with his footballing ability but also fits the culture at our club with his character and professionalism.

“He brings a real hunger and freshness to the group which is important. Darragh has all the physical and technical attributes to be a brilliant player for this club and he has a huge career ahead of him if he keeps developing and working hard.”