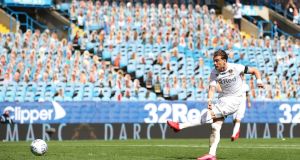 Leeds returned to the top of the Sky Bet Championship with an emphatic 3-0 home win against promotion rivals Fulham.

Patrick Bamford gave Marcelo Bielsa’s side an early lead and although they spent most of the first period defending, second-half goals from substitute Ezgjan Alioski and Jack Harrison lifted them three points clear of West Brom.

Fulham, who were aiming to close the gap on Leeds to four points in the race for a top-two finish, outplayed them in the first 45 minutes, but had no answer to their pace and precision after the break.

Bielsa’s double half-time substitution of Alioski and Pablo Hernandez proved a master stroke, with both players instrumental as Leeds seized back the initiative from the Londoners to take another big step towards the Premier League.

A minute’s silence took place before kick-off in memory of former Leeds players Norman Hunter and Trevor Cherry, who both died in April.

The tribute was observed in a near-empty stadium against a backdrop of cardboard cut-outs of fans, with around 15,000 having paid to have their chosen image placed on the seats.

Some games played out against similarly bizarre backdrops since the season resumed behind closed doors have had a training ground feel to them, but this crunch clash was as fiercely intense as it gets.

Fulham’s 23-goal striker Aleksandar Mitrovic was lucky to escape without so much as a booking after an elbow on Leeds defender Ben White in the second minute, which was missed by the match officials.

Anthony Knockaert flashed an early shot just wide for the visitors, but Leeds took a 10th-minute lead when Bamford applied a neat low finish for his 14th goal of the season after running on to Helder Costa’s cutback.

They spent most of the first period chasing and harrying as Fulham retained possession and built up a head of steam.

Knockaert and Mitrovic both threatened with shots from outside the box and the former forced Leeds goalkeeper Illan Meslier into a flying low save.

Roberts, pushed into the central striker’s role, squared the ball for Hernandez in the area and although the Spaniard’s drive was deflected wide, Leeds doubled their lead in the 56th minute.

Jack Harrison raced on to Mateusz Klich’s brilliant pass down the right and his ball into the area was coolly turned home by Alioski.

It was a killer blow that gave Leeds breathing space and they soon clicked into overdrive.

Hernandez’s stunning first-time pass sent Harrison clear down the right and he held off Joe Bryan’s challenge to steer home the ball inside the near post.

Fulham’s misery was complete when substitute Neeskens Kebano was sent off in stoppage time for his trip on Luke Ayling, which was his second yellow card offence.