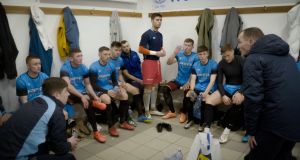 PFAI team manager Derek Pender gives a team talk ahead of the game against Home Farm.

In January 2019, Craig Speer saw a tweet that sparked an idea that had been drifting around in his head as a potential sports documentary for some time. The Professional Footballers’ Association of Ireland were holding their trial camp for out-of-contract domestic league players. Speer was aware of this close-season phenomenon when players assembled for a camp that was a de facto shop window. It was also a bit like golf’s qualifying school: a last chance to stay in the game.

He made his way down to Dublin Port Stadium that evening out of curiosity and was gripped by the idea of these young footballers playing for their futures against this bleak backdrop. “It was zero degrees and just concrete walls around the pitch and every League of Ireland badge was on the sideline, scribbling notes. Within 10 minutes the goalkeeper dropped a clanger and you are thinking: ‘aw no, this is it, you are gone’.”

The footage and interviews for Out Of Their League was filmed over a six-week period last winter, when the class of 2019/2020 spent six weeks training together, including a camp in Sweden before showcasing their individual talents in two games away to Rochdale United and against Home Farm.

The camp is organised by the PFAI. Both general secretary Stephen McGuinness and player executive Ollie Cahill agreed to give Speer unlimited access and it is easy to see why: the training sessions, under Derek Pender, come across as well organised, brisk and completely sympathetic to the predicament in which the footballers have found themselves.

Each season almost 85 per cent of League of Ireland players are out of contract. Most are re-signed again. But others fall through the cracks. Among those in the 2019 camp were Conan Byrne, the 34-year-old Shelbourne player who has qualified as a teacher. The new training regime clashed with his other work. He had to make a choice. “I still don’t own my own home,” he tells the camera.

Seán Boyd is 21 and was released by Shamrock Rovers after five years on their books. Ryan Masterson is 23 and living at home in Tallaght and his time with Bohemians was beset by injury troubles that he tried to play through at the camp. Even now, he is trying to manage injuries as he trains. “I haven’t played properly with a football since. I’ve been just doing the things the physio asked me because I want to come back one hundred per cent,” he says now.

Bray Wanderers’ Hughie Douglas was returning after a serious knee injury but found himself out of contract when the season ended. Speer charted their progress over six weeks when nobody was watching. The principle of the camp is tough: the players hastily form a team but the ultimate reward is not collective, it is individual.

“There is a real irony there in that they are looking for contracts that aren’t worth an awful lot,” says Speer.

“A lot of players are playing for 300 quid a week and a few expenses. What is more interesting for them is that football is all they have known. They were the best in their class, their region, their county – and they are all really good. A fair few have gone to England and come back. And they haven’t thought of other careers.

“The PFA guys are great for encouraging them into dual careers but many don’t take that on until they are 29 or 30. And a camp like this is a sudden example of being let go. Seán is a good example – he was a full-time footballer from 18 on a 52-week contract. A lot of guys get dropped in October and then picked up again in January, sometimes on a lower contract. It is so unfair in a way.”

As the weeks developed, the stories of some players became more compelling and the cameras followed them. When Boyd saw the film crew at training on the first night, he resolved to stay clear. But he was emblematic of the unfairness of the system and is a terrific and likeable communicator. As it turned out, his ambitions to secure a new contract were destroyed by a harrowing cruciate ligament injury he suffered during the Rochdale game. The image of Boyd being lifted into an NHS ambulance while the behind closed door game continues is among the loneliest in the film.

“Even before the injury, I was upset at having left Rovers after five years,” Boyd explains.

“And then I was in the camp and it was going well so I was getting back around to thinking this is going to be okay, I will get a club and do well. Then it hits you like a bus. And yeah, I was in tears for a few days. It took me a while to get my head around it but then I had people around me saying that they had come back from this kind of injury.

“You just have to get on with it. It is horrible, the injury itself and how long you are out of the game. But you aren’t going to sit there and quit at 21 years of age. It is not going to happen. You have to try and get yourself back and fit.”

Education and post-football opportunities are at the core of this film. In a 2018 survey, it was found that 30 per cent of League of Ireland players are equipped with Junior Certificate only – 74 per cent have the Leaving Cert as a maximum qualification.

“So the past year and a bit I have been worrying about life after football,” Boyd says.

“It comes into my head all the time – worrying about going to college or getting a job. There are a lot of pressures. People might think you are lucky to be doing something you love. But because you do love it so much it can hurt you more than normal – you care nearly too much. It is great, playing football. It is fantastic. But the lows, from losing a match to not performing well . . . it is a tough environment too.”

He hopes that even for the generation following in his footsteps, the emphasis on persisting with schooling and having another option will be stronger. But he knows too that convincing a youngster besotted with the game is no easy trick.

“It would be hard to say to a 12-year-old ‘listen, you have to look after the school work too’. All I wanted to do was kick a ball. But it could be brought across as more important. Every kid wants to play in the Champions League or the World Cup. It happens for some. For the majority it doesn’t.

“I am 22 soon and am only out of school a few years. And when I was in school, I was getting paid by Rovers and it felt great. I kind of gave up on my education and it is coming back to bite me because it is hard to get into college or a proper job without the Leaving Cert I should have got.

“It is important but at the same time you don’t want to crush a kid’s dreams. You don’t want to say . . . ‘look you aren’t going to play in the Premier League so you need a fall back’. I played with Ronan Finn, one of the best League of Ireland footballers of all time – five leagues and [played in the group stages of the] Europa League. But his brothers and sisters were constantly onto him about education and about a real job. And he has got into education through UCD and is set up for life after football. So if I was giving advice to a 17-year-old I would say ‘have a look at Ronan Finn’.”

Irish football is at a crossroads. The parlous state of the FAI finances and internal structure and the stresses caused by the pandemic has clarified the need for a radical reinvention of the game here. On the day that the PFAI team headed to Rochdale, news broke on the radio that Limerick City had folded. And when the team played against Home Farm, McGuinness was at the Oireachtas hearing all day. That hearing coincided with Shane Ross publicly casting doubt on the future of the league. Those contrasts struck Speer as he went about filming.

“Like, there is another documentary to be made about the bigger picture in Irish football. The irony of Shane Ross saying that . . . because who this really affects are all these young fellas playing for contracts that are less than the minimum wage.

“And this was their two biggest days and against that backdrop. It is so sad for them because they are the victims in all of this in that they are talented young athletes. And the PFA are doing great work. But they are probably limited in that there isn’t enough funding to allow them to do everything they would like to do.”

– Out Of Their League will be shown on Eir Sport at 8pm on Monday, June 29th.