Seven Premier Division clubs have proposed a one up, one down plan to FAI 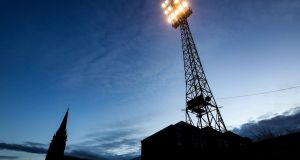 In the ongoing absence of actual football, perhaps the Asian markets that seem to do such big business off the back of Irish matches will have switched their attention to predicting which promotion and relegation formula clubs will agree on in order to get the SSE Airtricity League season up and running again. As of Friday evening, there was still no completely clear favourite.

Earlier in the day, seven top-flight clubs wrote to the FAI to endorse a straight one up, one down solution. The prospect of two of their number facing the drop at the end of a severely shortened season was, they argued, unfair and effectively out of the question. The issue was described as “a red line” with the letter signed by representatives of Cork City, Dundalk, Finn Harps, St Patrick’s Athletic, Shelbourne, Sligo Rovers and Waterford.

That seemed to represent significant progress. Previously, it had been believed that a couple of those would be reluctant to return at all as long as the possibility remained of any side losing its top-flight status come the end of the season, but they seem to have been persuaded at this stage that that is simply not practical in a league where the stakes will still be high for the teams at the other end of the table.

The first division clubs countered, however, with a proposal of their own; one that involves their champions going up automatically and two teams from each division then playing off for the last three spots in an expanded Premier.

The idea, their argument goes, is that there had been some discussion around introducing a mid-season split next year anyway and so the 12-team phase need only last half a campaign in 2021 after which the placing from the full schedule of matches could be used to sort out the structures for the following year.

The attraction of this plan, says Drogheda United’s Conor Hoey, is that it “creates excitement through the rest of the season by generating more meaningful games”.

Both proposals can claim the support of a majority in one of the two divisions, leaving the FAI in the difficult position of having to find a solution. It may well be that, as had suggested in a letter regarding the issue sent by the association to clubs on Thursday night, the National League Executive Committee (NLEC) simply has to have the final say.

The aim, when that letter was sent, was to achieve a resolution over the course of Friday so that those clubs who have not already done so could switch their focus to getting their squads back into training. That process has been continuing, though, with the PFAI in talks with St Patrick’s Athletic and Cork City, although there is still no obvious progress at Waterford who, among other things, must quickly recruit a new manager.

The very clear sense is still that this will all eventually get pushed over the line in some way or another but a final resolution, imposed or otherwise, seemed almost certain on Friday to be at least a few days away with some speculation that an attempt might be made to hold a meeting of all the clubs on Monday

In the meantime, Gary Owens and Niall Quinn are, it seems, continuing to talk with the clubs in the hope of finding an agreed solution that “protects the integrity of the game and is fair to everyone”.

As the Northern Ireland Football League drew a line under their league season and declared Linfield champions, meanwhile, there appears to be broad agreement on the rest of the basics involved for the restart here with the remainder of the campaign set to run from July 31st to November 7th or so, with the concluding three rounds of the FAI Cup to be played immediately after that so as to allow participating clubs to shut up shop for the year as soon as they are knocked out.

Second Waterford FC player to undergo testing after reporting Covid-19 symptoms 21:15
Crowd limits to remain at 200 as Government stalls move to phase four 21:15
Ryan Brennan secures the points for 10-man Shelbourne in Donegal 20:18
Defending champion Rafa Nadal pulls out of US Open due to coronavirus concerns 20:40
GAA offer €40 refund after all intercounty season tickets are cancelled 18:51