Leeds capitulate late on as Cardiff snatch a draw 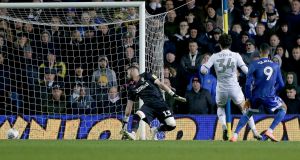 West Brom stand alone at the top of the Championship after Leeds inexplicably imploded at home to Cardiff.

With Albion winning 3-2 at Birmingham in the early kick-off, Leeds looked like joining them on 49 points when they went 3-0 up at home to Cardiff.

But the Whites, with just 10 goals in the against column all season, somehow let in three — the last of which came with Cardiff down to 10 — to draw 3-3.

There looked to be no danger for Leeds as Helder Costa and Patrick Bamford’s brace sent them well clear.

But Lee Tomlin pulled one back and then Sean Morrison another.

Morrison’s straight red card with four minutes left looked to have ended things, but Robert Glatzel had other ideas when he equalised in the 88th minute.

West Brom had to thank substitute Charlie Austin as they were twice able to come from behind and win.

Birmingham twice led thanks to Lukas Jutkiewicz and Harlee Dean, but Grady Diangana and Austin levelled, before Austin’s winner nine minutes from time.

Sheffield Wednesday’s rise up the table continues apace, the Owls winning 4-0 at Nottingham Forest thanks to a first-half Jordan Rhodes hat-trick.

Rhodes, scoring for the first time since January 12th, kicked things off in the ninth minute, added a second in the 13th and then produced a fantastic overhead kick in the 37th.

Steven Fletcher made it four on the stroke of the break and Wednesday were unable to add to their tally, but the work was more than done.

Fulham’s recent slump continued with a third straight loss, Bryan Mbeumo scoring as they were beaten 1-0 at local rivals Brentford, who are now fourth.

Preston are third, Jayden Stockley scoring a late winner as they beat Luton 2-1. Paul Gallagher scored a rebound after his penalty was saved and James Collins converted from the spot for Town.

Middlesbrough remain in deep trouble just outside the relegation zone, losing 3-1 at Swansea, as substitute Marcus Browne had an afternoon to forget.

Browne was a 51st-minute replacement for Adam Clayton, was booked in the 52nd minute and sent off in the 63rd — a straight red.

His indiscretions were all the worse given his side had just cancelled out Andre Ayew’s penalty with a Marcus Tavernier strike. Ayew then went on to add a second and Sam Surridge a third.

Things would get even worse for Boro, with Paddy McNair sent off for a challenge on Matt Grimes.

Wigan and Huddersfield played out a 1-1 draw at the DW Stadium.

Josh Windass took advantage of a defensive error to put Athletic ahead, but Karlan Grant’s 12th goal of the season earned Town a point.

New player-coach Wayne Rooney watched on as Derby lost 1-0 at home to Millwall, Tom Bradshaw scoring in the 25th minute as Lions boss Gary Rowett enjoyed a winning return to his old club.

Bottom side Barnsley registered their third win of the season with a 5-3 victory over QPR.

Conor Chaplin’s opener was cancelled out by Luke Amos, with Chaplin then going on to score twice for a hat-trick.

Stoke and Reading played out a dour goalless draw.