Brendan Rodgers commits future to Leicester with new contract to 2025 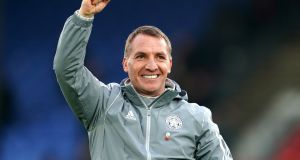 Brendan Rodgers has committed his long-term future to Leicester by signing of a new contract to 2025.

Rodgers, who was among the managers of interest to Arsenal in their search to replace Unai Emery, has taken Leicester to second in the Premier League since joining from Celtic in February.

“When I made the decision to come to Leicester City, it was because I was excited about the direction the club was taking and how I could apply my experience to the journey,” Rodgers said after signing the new deal.

“I came here with a purpose to add something to that and to help the club build for the future . . . I’ve inherited an outstanding team of staff that are dedicated to progress and improvement and we have a group of players that are a joy to work with every day.”

Rodgers understandably now has his sights set on ensuring he builds on such solid foundations, initially put in place by former owner Vichai Srivaddhanaprabha prior to his death just over 13 months ago, and he brings silverware to the club to add to their fairytale league title triumph of 2016.

“This club hit the highs of a few years ago, which were incredible, and it obviously had the low which was devastating for everyone,” added Rodgers. “What we have tried to do is look to build on the incredible legacy of Vichai, and when I speak to Top [Aiyawatt Srivaddhanaprabha], I understand exactly where it is they want to go, to be fighting and competing at the very top of this division.

“We’re a wealthy club with fantastic owners, and yet we don’t have the finances of a top-six club, so it’s about whether we can do it another way, a different way?

“I hope, with my team here, we can continue to break records, win some trophies, and ideally be in a healthy position at the top end of the table, competing and fighting, which is important.”