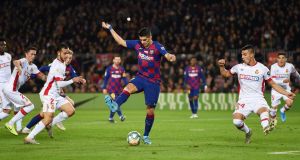 Lionel Messi scored the 53rd hat-trick of his astonishing career to help Barcelona crush Mallorca 5-2 at the Nou Camp to retain their place at the top of LaLiga.

Following Real Madrid’s 2-0 victory over Espanyol earlier in the day to temporarily move top, the pressure was again on Barca to provide a response and they did so in emphatic fashion, with the mercurial Messi again at its heart.

Antoine Griezmann set the ball rolling after just six minutes and with almost route one football after Dani Rodriguez had missed a sitter from just six yards.

From the ensuing goal-kick, Marc-Andre ter Stegen launched the ball upfield for Griezmann to then embark on a stunning run from the halfway line before chipping the ball over goalkeeper Manolo Reina.

Griezmann then turned provider 10 minutes later, but the finish was all Messi, who had showed off his sixth Ballon d’Or to the fans before kick-off, as he curled beyond Reina from 25 yards.

Although Barca then threatened a third, it was Mallorca who gave themselves a lifeline in the 35th minute when Ante Budimir’s shot took a slight deflection off Clement Lenglet beyond ter Stegen.

Barcelona, though, finished the first half with a flourish, with Messi again beating Reina from outside the area with another sublime curler six minutes later to restore the two-goal cushion.

Two minutes before the break, Barcelona made it 4-1 courtesy of an outrageous goal from Luis Suarez as, with his back to goal he somehow delivered a backheel chip over Reina from Frenkie de Jong’s pass.

Mallorca at least came out fighting after the break, with Budimir heading home his and his side’s second of the night in the 64th minute to cut the deficit to two.

But it was left to that man Messi to have the final say, smashing home a drive in the 83rd minute for his 35th La Liga hat-trick to move ahead of Cristiano Ronaldo’s tally.

Real Madrid earlier kept the pressure on Barcelona with a 2-0 victory over Espanyol at the Bernabeu.

Real’s victory moved them temporarily three points ahead of Barca, with the first El Clasico of the campaign taking place on December 18th.

Zidane was without injured duo Gareth Bale and Eden Hazard so started teenage wingers Vinicius Junior and Rodrygo together for the first time.

And the pair were involved in Real’s best moments early on as they tried to break down an Espanyol side that had not won in the league since October.

Real, wearing their green third kit rather than their usual white to raise climate change awareness, had their first effort in the sixth minute when 19-year-old Vinicius cut inside from the left and forced a save out of former Real goalkeeper Diego Lopez.

Six minutes later it was the turn of Rodrygo to have a sight of goal, but when a corner was cleared to him on the edge of the area, the 19-year-old curled an effort harmlessly wide.

Soon after, Vinicius charged forward before slipping in Benzema down the left but the former France striker shot harmlessly at Lopez.

Espanyol had their first real sight of goal in the 27th minute when Esteban Granero’s header forced Thibaut Courtois into a diving save, but seconds later Real had broken down the other end and Lopez had to extend his left foot to keep out Vinicius.

Real finally found a way through eight minutes before half-time and it came from an unlikely source. Benzema threaded a ball into Varane, who was still forward following a corner, and the centre-back slotted low into the far corner for his first club goal since March.

Real pushed for a second to kill the game after the break, with left-back Mendy firing wildly over from the edge of the area and Benzema forcing another impressive save from Lopez.

Benzema should have settled the game with 19 minutes left but, after brilliant work by Vinicius down the left, the striker failed to hit the target from near the penalty spot.

Espanyol were still in the game and Courtois had to be alert to save Marc Roca’s long-range effort with 13 minutes left.

But Benzema made the game safe in the 79th minute, lashing home from close range after exchanging passes with Federico Valverde in the penalty area.

Real had Mendy dismissed after he picked up a second booking in the 83rd minute, but Espanyol were unable to cause any problems as the game petered out.

1 Gerry Thornley: After 32 weeks the Six Nations is back up for grabs
2 Allianz Football League permutations: Who needs what?
3 Stockdale and Ringrose on board with expansive Irish game plan
4 Bennett girding his loins for impossibly unpredictable Vuelta
5 GAA expected to go ahead with championship under Level 5
Real news has value SUBSCRIBE
Crossword Get access to over 6,000 interactive crosswords