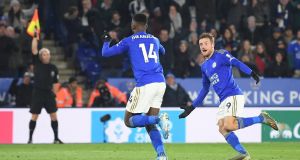 Kelechi Iheanacho of Leicester City celebrates with Jamie Vardy after scoring a late winner which was ruled offside but then overturned by VAR. Photo: Michael Regan/Getty Images

As for Marco Silva’s reign at Everton, maybe that will be over soon. But if the Portuguese is sacked soon, it will not be because of this performance: Everton played well, forcing Leicester to show all of their impressive resourcefulness to dig out a win.

This was a sixth league victory in a row for Leicester, their best run since the 1962-63 season. They finished fourth back then and are a good bet to do much better this term; the champions back then, by the way, were Everton. A repeat of that is not on the cards any time soon, even if they did play well here, even taking the lead through Richarlison before Jamie Vardy and Iheanacho hit back for a side that never stop believing.

In less than 10 months in the job Brendan Rodgers has made Leicester such a slick machine that they seem to function almost on automatic. That is why it was an obvious decision for the manager to redeploy the same lineup for the sixth game in a row here and had every reason to be confident of another win.

Everton arrived as the flabby embodiment of the opposite of Leicester, an infuriatingly erratic team riven by inefficiency and uncertainty. Given the respective form of the sides going into this game, it seemed like an away win would require something close to miraculous. One could have been forgiven for thinking that Silva’s strategy, with a new three-man central defence, smacked of a Hail Mary. But in fairness to the beleaguered manager, it turned out to have been immaculately conceived.

Leicester struggled to find openings in the visitors’ defence. Everton’s players certainly did not lie down to sacrifice their manager. They played with dynamism and discipline. And they carried a serious threat on the counterattack. They showed that as early as the third minute, when Dominic Calvert-Lewin ran beyond the home defence and clipped the ball from the left wing to Richarlison, who would have had a clear shot from 16 yards if his control had not betrayed him.

Five minutes later Silva could take satisfaction from seeing his wing-backs combine in attack, with Lucas Digne crossing from the left for Djibril Sidibé, whose shot on the run from the edge of the box whizzed just over the bar.

For the most part, though, Everton absorbed the home team’s pressure well and, with the extra player in central defence, they continually blocked passes and shots at critical moments. Then they took the lead with a fine attack.

It began with a throw-in in their own half. Richarlison received it on the left, flipping the ball off to a teammate and scampering forward. When Alex Iwobi slided it out to Sidibé on the other flank, the Frenchman delivered a splendid cross and Richarlison darted in front of Ricardo Pereira and angled his body to direct a terrific header beyond Kasper Schmeichel from 10 yards.

In the following minutes Mina made two excellent blocks to prevent an equaliser, denying first Pérez and then Jonny Evans. But Leicester kept coming and in the 33rd minute they thought they had won the perfect opportunity to draw level when the referee pointed to the spot after Ben Chilwell went down following a wild swing by Mason Holgate. The defender missed the ball by some distance and forced Chilwell to take evasive action – but apparently that did not justify a penalty according to the VAR official, who advised the referee to overturn the original decision.

By half-time the onus was on Rodgers to inspire his players to find a way of counteracting Silva’s plan.

But Everton were the first to threaten after the resumption, Keane going close from a corner by Gylfii Sigurdsson in the 50th minute.

That drew a sharp retort from Leicester, Wilfred Ndidi winning the ball in midfield before offloading to Pereira, who charged forward before drilling a low shot goalward. Pickford did well to tip it wide.

Rodgers adjusted his team’s approach just after the hour, replacing Pérez with Iheanacho, who was instructed to play closer to Vardy. Within six minutes the changed paid off, as Iheanacho collected a pass from the excellent Ndidi and crossed low for Vardy to tap in from close range.

That was the sixth league game in a row in which Vardy has scored, his best run since he netted in a record 11 successive Premier League games in 2015. But with half an hour left, could Leicester go on to claim their six straight win?

Everton were certainly going to have to batten down the hatches. Pickford made another good save in the 73rd minute to deny James Maddison. Two minutes later Vardy headed over from seven yards after a dainty cross by Youri Tielemans.

With Leicester pressing for the win, Silva made and one of the new arrivals, Moise Kean, came close to scoring on the counterattack, his chipped shot from 20 yards narrowly missing the target. Most of the action was at the other end, however, with Leicester attacking in waves. Their relentless was rewarded in stoppage time, when Ndidi made another break from midfield and fed his Nigerian compatriot Iheanacho, who finished smartly.

The goal was originally disallowed for offside but this time VAR intervened in Leicester’ favour, ruling that Iheanacho was onside thanks to the position of Mina’s knee. Sometimes a match, a title race and a manager’s future can come down to fine margins. – Guardian