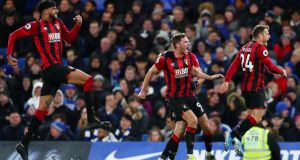 Gosling struck an 84th-minute winner when he flicked the ball over Kepa Arrizabalaga and into the net despite standing with his back to goal, ending Bournemouth’s run of five successive league losses.

Kepa was made to pay for another bout of poor positioning, while Chelsea were punished for an incoherent and toothless display that will have left boss Frank Lampard far from impressed.

Lampard has demanded more “personality” from his Chelsea players in a bid to arrest their league slump, but despite a host of big names there was precious little star quality on view in west London.

Instead, in-form striker Tammy Abraham was too isolated too often, with team-mates unable to provide the service to capitalise on his sharpness in front of goal.

Eddie Howe’s Bournemouth headed into the clash missing eight injured senior players and fretting about the source of their next league victory.

The Cherries had not won since seeing off Manchester United 1-0 at home on November 2, and would have expected a stern test in the capital.

Howe’s men kept their heads and shape throughout however, even rebuffing a late Chelsea rally after Lampard threw on Michy Batshuayi as a second striker.

While Bournemouth were left to toast a vital win, Chelsea could only lament another below-par league performance.

After Tuesday’s high of seeing off Lille 2-1 to reach the Champions League’s last 16, this was a serious bump down to earth for Lampard and the Blues.

Mason Mount spurned the finest chance of a wretched first half, unable to beat Bournemouth goalkeeper Aaron Ramsdale who blocked well after Jorginho’s dangerous dink into the box.

Abraham could not turn Cesar Azpilicueta’s cross goalwards despite a neat run and first-time effort, while Christian Pulisic failed to find a team-mate with a header across goal.

Ryan Fraser saw a low shot blocked in a rare Bournemouth raid, but otherwise it was 45 minutes of bluster.

Chelsea rode their luck on a host of occasions after the break as an emboldened Bournemouth started to chase the game.

Jefferson Lerma was hugely fortunate to escape without conceding a penalty for elbowing away Willian’s free-kick as Chelsea rallied as the match ticked past the hour.

Callum Hudson-Odoi added impetus off the bench, and his cross eventually led to Emerson Palmieri heading straight at Ramsdale.

From point-blank range the Chelsea left-back should have easily nodded home.

But instead the Blues were left to battle away as the turgidity continued.

Lampard went for broke by sending on Batshuayi, sacrificing Jorginho in chasing a much-needed win.

And yet it was Bournemouth prevailed, as Gosling conjured an improbably lob to stun Kepa, with Azpilicueta unable to clear off the line.

The goal was rightly awarded after a Video Assistant Referee (VAR) check, with the ball clearly crossing the line despite Azpilcueta’s best efforts — and Philip Billing not active as he was retreating when the ball was played in to Gosling.

Burnley ended a three-match losing streak thanks to a Chris Wood header that gave them a 1-0 win over Newcastle United at Turf Moor.

Newcastle came into the game after back-to-back wins but were weakened by injury. In bitterly cold conditions neither side could really find any fluidity in a poor first half.

The Clarets broke through in the 58th minute when Wood outmuscled Federico Fernandez to head home an Ashley Westwood corner at the back post.

Jack Cork came close to doubling Burnley’s lead when he robbed Sean Longstaff and slalomed into the area, but his low drive was parried out by Newcastle keeper Martin Dubravka.

Dwight Gayle came close to equalising late on but turned the ball wide, after Brazilian Joelinton had bundled Erik Pieters off the ball and delivered a dangerous low cross.

A superb second-half double by midfielder John Fleck sent Sheffield United up to fifth in the Premier League with a 2-0 home win over fellow newcomers Aston Villa, whose captain Jack Grealish missed a second-half penalty.

After a dull first period, the hosts burst into life five minutes into the second half with a brilliantly-worked opener, Chris Basham back-heeling the ball to John Lundstram who fired it across the box for Fleck to lash home from close range.

The build-up play for Fleck’s second goal was equally impressive as the Blades worked the ball in from the left before striker David McGoldrick hooked a pass over his shoulder to Fleck, who again finished confidently.

The visitors were thrown a lifeline when the video assistant referee (VAR) called play back to award them a penalty for handball, but Grealish thumped his spot kick off the crossbar and the ball was cleared by Lundstram.

With tough games against fellow strugglers Southampton, Norwich City and Watford to come over the busy Christmas period, that penalty miss seemed to knock the stuffing out of Villa as they slumped to their third league defeat in a row.

Sheffield United have 25 points from 17 games, while Villa are on 15 and will drop into the bottom three if Southampton draw or win at home to West Ham United in the late kickoff.